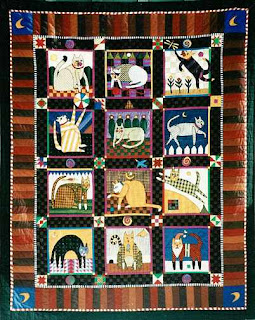 It has been more than ten years now since I subscribed to a BOM called "Folk Art Cats."  I thought it to be an amazing quilt.  I still do.

I completed one block.  That took about three months.  There was some bad language involved.  I cut out the pieces for a second block.  I put the whole thing away.  Far away.

This morning I was in e-conversation with altarego, someone I "met" through kim and I don't remember how I met her.  Suffice it to say that my life is far richer for "knowing" the two of them.  But I digress.

Anne and I were talking about a goal of hers, and she told me what was getting in the way of her making further progress.  A light bulb moment for me -- I realized that for any kind of a goal or ambition that is stuck, to get unstuck, a person has to figure out what is sticking.  What is the snag.

I tried to think of a personal example and -- unwelcome -- those blasted Folk Art Cats came to mind.  The snag that has kept me for more than ten years from getting on with the project is the incredible complexity of the blocks.

I know, from my journey to and through seminary and from the What Was I Thinking quilt, that any big goal needs to be broken into small and sometimes smaller steps or pieces.

A few months ago, when we were getting ready to move Joe's office into the lower level, I went through all of my quilt projects and fabric and held a huge purge.  There were things that I knew I would never finish; I had lost all interest in them.  At this point, just three months later, I can't even remember what most of them were.

The Folk Art Cats were not in the giveaway pile.  I must have thought there was still a possibility that I could finish the project in this lifetime.

This morning I trolled the internet looking for photos of Folk Art Cats quilts that others had finished.  I found one.  One.  Clearly, wiser people that I had the sense not to buy that BOM!  Or there are cat parts languishing in boxes in many homes across the country (not a pleasant thought when taken literally).  [Bo was sitting on his cat perch soaking up the sun and just now leaped down and fled the room.  I'm exuding some kind of bad karma just thinking these thoughts.]

So.  Today I am going to go dig out that box one more time.  I will see if I can break it down into small components and if I can bring myself to take one small step.  And then another.  Or think seriously about whether this is something that I really do want to make and, if not, offer it to someone who is either more skillful, more determined, or more foolish than I am.

Oh, and if you didn't click the link to Altar Ego's blog above, click here to read her post for today.  It stopped me in my tracks.

Gretchen said…
Thank you for the link to a very powerful post. I am cheering you on with Folk Art Cats. I wonder if I too have that pattern somewhere in the depths of my sewing room. Probably. I think we can get through anything by focusing on small chunks at a time. Best wishes for the new year my friend.
Saturday, January 01, 2011 12:12:00 PM

Paula, the quilter said…
That post by alter ego was so REAL, thank you for the link. The Folk Art Cats... can you simplify the blocks without losing the integrity?
Saturday, January 01, 2011 12:16:00 PM

Pamela Kieffer said…
Nancy, I have a quilt like your cats. The 12 Days of Christmas, appliqued . I look at the finished blocks and the unfinished ones and put it back. I took it out yesterday and listed it on my UFO's for the year. Good luck with yours.
Saturday, January 01, 2011 12:16:00 PM

Nanci said…
I got stuck last year on my 7th month of the civil war quilt and vow to pick up again this month and move forward so I'll be sending you some positive vibes for you to make some small steps on the cats. I know when you finish it it will be gorgeous. Maybe you just need to find 10 friends and everyone would only have to do one and it would be finished before you knew it.
Saturday, January 01, 2011 12:57:00 PM

Mrs. Goodneedle said…
One giant LEAP to keep in mind: look at the skills you have built up in the last ten years; that should most definitely ease the journey and set you on your way to the finish line.
Saturday, January 01, 2011 1:12:00 PM

brite said…
OMG that quilt is fantastic! I want/love/must have so much!! I can understand just looking at it what a daunting piece of technical work it must be, but oh my the results!! Hope you finish it someday!
Saturday, January 01, 2011 1:33:00 PM

Mona said…
Hi Nancy! I've been reading your blog for a short time now. I remember the cat quilt bom and wished now I'd done it. I am a seasoned appliquer and would love to make one for my cat-loving son and dil. I think you're getting bogged down a bit by the thought of doing all of the blocks. Just think of the one you are working on at the time and it will not feel so overwhelming, and you may be finished before you know. Or sometimes, it just feels like more work than we want to give it at this time in our lives. It's okay to let go then. Good luck to you! <Mona
Saturday, January 01, 2011 1:55:00 PM

Shasta Matova said…
It is a cute quilt, and I think you can absolutely do it. Maybe it just wasn't time for you to finish it earlier - you had to build up your skill level and confidence first. Going to alter ego's post now.
Saturday, January 01, 2011 3:53:00 PM

Jennifer said…
Nancy, that will be an amazing quilt when it's done! You can use a needle and thread, and you can stitch - so that is all the quilt is, just one fabric stitched onto another. I would love to see it in all its glory when it's done.
Saturday, January 01, 2011 7:04:00 PM

Leeann said…
I have this pattern a friend gave it to me after she completed her quilt. So there are at least 2 out there done! I still like it, but I think a lot could be simplified, eg the backgrounds don't need to be pieced as heavily. If you did a couple a year and then added another year for getting it together and quilting, it would take about 7 years! But is less than 10 years we have both had the pattern.
Saturday, January 01, 2011 7:50:00 PM