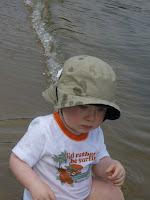 It was Tom's idea, actually.  He phoned me a couple of weeks ago and said that he and Nate and Anastasia wanted to see Joe and me before our scheduled visit to Brevard.  But, he said, they didn't have it in them to drive to Philadelphia.  Which is understandable.  So, he suggested, what if we met halfway for an overnight?

Why not, I replied.  He'd done all the work, found the place, the hotel, the attractions.  All we had to do was show up.  So I told Joe I was taking him away for an overnight on Sunday and not to ask where. 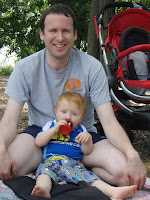 Destination:  Kent Island, Maryland, just this side of Annapolis.  We left at the crackadawn on Sunday, and pulled into our rendezvous spot about twenty minutes early.  So we just opened the windows, put the seats back, and snoozed until T, A, and N pulled in right beside us.  We had a delicious breakfast at Holly's, and then wandered down the road to a wee little bay beach where Nate paddled in the water and the rest of us admired him.  That was where I got the sunburn, despite the fact that it was not yet eleven o'clock in the morning!

Tom had found a state park that had a larger beach where swimming was encouraged, as well as a shady grassy meadow overlooking the beach.  There we had a lovely picnic of fruit, cheese, veggies and yogurt, and Joe and I observed while the rest of them went to the beach.

At three o'clock we were able to check into our hotel.  Anastasia helped Nate take his nap, while the rest of us cooled off in the pool.  Then it was off to get dinner.  We'd heard a lot about the Crab Deck in Grasonville, but when we got there, the wait was 1-1/2 hours or more and Nate wasn't the only one who found that intolerable.  Across the parking lot was the Fisherman's Inn, owned by the same people with practically the same menu.  We feared the wait would be the same, but seating was immediate.  The place was lovely with a huge collection of oyster plates lining the walls, and a model train running around the ceiling -- this kept Tom and Nate amused for quite a while.  I don't believe I've ever tasted better calamari.   And that was just the appetizer.  I always get rockfish when I find it on a menu and this place did not disappoint.  Oh, what a dinner!  And when the waitress, sweet Megan, pressed us to have dessert, we selected a piece of coconut custard pie with four forks.  Heavenly! 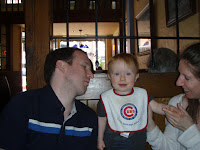 After checking out of the hotel this morning we drove over to Annapolis just in time to catch part of the parade (which we hadn't known about).  It was pretty hot, but we wandered around the shopping area and looked at the water and the boats, and Nate frolicked on the lawn of the court house.

Well, yes, of course we had to eat together one more time.  Joe and I introduced the others to our favorite restaurant in Annapolis and it certainly met with their approval.  Soon after lunch it was time to part ways and head off in our separate directions, promising to do it again.  And again. 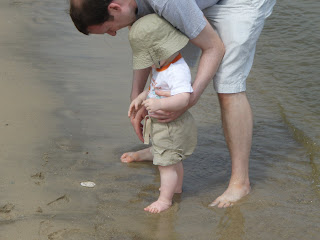 Char said…
Glad you had a great time. We love that area our friends used to dock their boat in Annapolis. The food at the Crab Deck is very good, we have been lucky so far not to have the wait.
Monday, May 30, 2011 8:52:00 PM

Pat said…
So happy you got to spend time together!! Sounds like the perfect one night stand, with absolutley no regrets in the morning. BTW, I am in love with that picture of the two barefoot beachcombers! That's frame worthy!
Monday, May 30, 2011 8:54:00 PM

Helen said…
Wow, sounds like just the best time, Nancy! So glad you got to enjoy all of it.

quiltmom anna said…
What more could you wish for - a lovely setting filled with rich family times and good food. It sounds like a lovely tradition. Making those memories are what life is about.
Thanks for sharing something lovely to make others smile-
Warmest regards,
Anna
Monday, May 30, 2011 10:10:00 PM