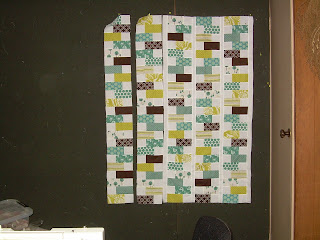 I notice that time doesn't seem to pass at an even pace.  Right now it seems to be flying by at warp speed (whatever that is).  After an idyllic week of being home every single night, I'm in a week where I have a commitment darned near every night. Sewing time suffers.

More cows have come home, and I'll try to do a post about them in a day or so.  They are all wonderful and so varied.

Recently, I concentrated on getting Justin's quilt top finished.  At White Oak in March I got what I thought was the entire top finished except for the borders.  I showed it to a friend who said she thought I should not add borders and instead add more blocks.  I stewed about this for a few weeks and then discussed with Joe who concurred with my original plan:  Two borders.  So Justin's quilt top is a flimsy and was delivered to the machine quilter tonight.

I also delivered the quilt I had been making for Sherry's pregnant coworker.  I'll have both back and ready to bind around June 2, so there should be final pics shortly after that.

On Sunday, after completing Justin's flimsy, I started playing with the scraps. I'd seen a snuggle quilt on the internet somewhere that I liked and thought, "I could do that."  And decided there was enough fabric left from Justin's quilt to make a baby quilt.  So I started that and it is pictured above.  It's not my regular kind of thing (although I've begun to wonder whether I actually have a regular kind of thing) and I like it a lot.  Wouldn't it be nifty if Justin and Tal started a family in the next couple of years and received a baby quilt that was related to their wedding gift?

Anonymous said…
Nancy,
Is it just my eyes or has the type size on your blog changed?