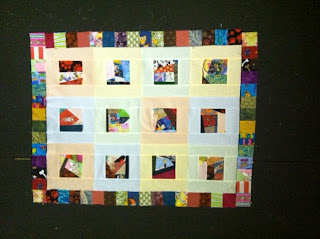 I think it was about a year and a half ago that Bonnie came to town and taught a workshop as part of a fund raiser that our church was having. Maybe it was two and a half years ago. The time passes so quickly. The workshop was on crumb blocks, and while I had a fantastic time that day, I doubted that  crumb blocks would be something I would continue to make.

I made Pictures at an Exhibition for myself, another large quilt of bordered crumb blocks as a thank-you gift to some generous friends, and a queen size crumb block quilt for Sherry for Christmas. Some of these quilts had the 4-1/2 inch blocks that Bonnie taught us; others had 6 inch crumb blocks. I became utterly addicted to crumb blocks, making countless mug rugs, pot holders, and small table toppers.

And apparently I haven't gone into any kind of remission yet.

To the right is my fourth crumbs quilt, before the borders are sewn on. It is a baby quilt for a colleague. I don't always make quilts for coworkers; they are a fairly fertile bunch, producing a couple of babies each year, doing their bit to support enrollment for the school. This baby is due in a couple of months and is a fifth child in a family, a fourth girl. I thought she deserved a quilt.

I took this photo with my phone and don't know if it will enlarge. If not, do not be frustrated. When it is finished I will take a good photo to share.

Barbara Anne said…
This kind of quilt looks wonderful in every variety of fabrics and sizes I've seen it! As has been said, this 5th baby child does need something especially for her and this quilt fits the bill perfectly. How thoughtful and sweet of you to make it for her!!