The Quilts of Christmas 2012: Three 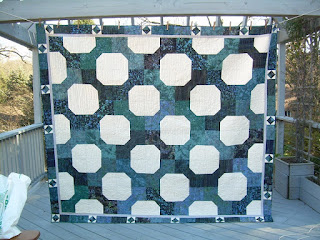 Three married children, three queen quilts. And what adventures ensued with the making of the one for Amy and Andrew! When we visited them, there was much sneaking around to view their bedroom, not a place we normally go. We didn't know what the color scheme was! Joe actually took some pictures to confirm that the walls were a pale mushroomy gray and the drapes were dark blue. The furniture is dark, too.

I had seen a pattern for a giant bow-tie quilt on Katy's blog, and thought that would be just the thing. I carefully wrote down how much background yardage I would need and how many FQs for the ties and headed out to Intercourse to shop. The store wouldn't cut FQs, but since I was using batiks, I really didn't mind a bit. I was thinking of a plain gray for the background, but stumbled across a gorgeous fabric that I couldn't resist: a slightly creamy white with the tiniest tiniest dots in the palest shade of mushroomy gray. I just loved it.

My goal was to have the blocks all made before our autumn White Oak event, and put the rows together and apply the border there, so I plunged into the blocks immediately. Then it hit me: the border! I checked my instructions and found I had neglected to buy 1.5 yards of the mushroomy for the border that the pattern planned. Aaargh! I called the store, who told me the fabric was all sold and they weren't getting any more. I embarked on a google search based on the selvedge information and found three stores that had my fabric: One in New South Wales and two in England!

Off to White Oak I went with my blocks, my left-over scraps, my border fabric, and my bonus triangles. Got the blocks all put together. Turbo took one look at the top and declared that the mushroomy border was not to be. She fooled around with my left-over scraps (remember, I'd had to buy half yards instead of FQs) and the wonderful bonus triangles and came up with a couple of plans. I had some solid gray along for another project and we used that for a slim stopper border and then the real border.

I love how it turned out. So did A&A. I gave it to them with a set of mushroomy gray flannel sheets.

And I still have my gorgeous yard and a half of mushroom for Another Project! 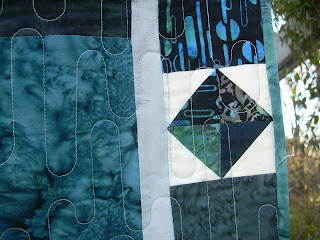 Barbara Anne said…
Here's another lovely quilt, perfectly suited to its new owners! Love the tale of how you found out what colors would be needed and how you found enough fabric for this wonderful quilt! The setting for the Bow Tie blocks and the fabrics you chose make the quilt look so fresh and modern, too. Methinks the border fairly sparkles!

Jean Burke said…
Wow - three queen size quilts for Christmas!! First of all, a well-deserved pat on the back. Way to go! They are all beautiful and this is no exception. Thank goodness for our quilting 'sisters' who help us to see things differently. The border is just perfect - it adds a lovely component. Nicely done......
Friday, January 04, 2013 8:49:00 AM

Janet O. said…
This is another beauty, Nancy. I love imagining you and Joe sneaking around their home to get to the bedroom undetected! Making quilted gifts can be so clandestine! : )
What an adventure with the border. Don't know what it was "supposed" to be, but what it is looks just perfect!
Friday, January 04, 2013 10:17:00 AM

Quiltdivajulie said…
I would say that you did a FABULOUS job on these three Christmas quilts - allowing each to suit the recipients SO very well. CONGRATS to you!
Friday, January 04, 2013 10:45:00 AM