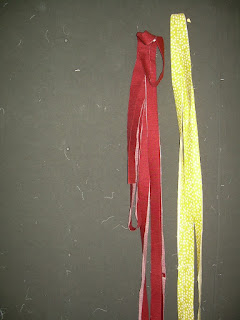 Years and years ago, when Joe was in the Navy, he used to participate in something called the Eight O'Clock Reports. As it was held aboard ship, I never got to attend, and I suspect it wasn't anywhere as interesting as I imagined. As I write, it is a little after 8:00, so here is my eight o'clock report for today.

I've had a good weekend. Saturday was spent doing all kinds of responsible things -- buying food, mailing parcels, picking up dry cleaning, acquiring giftwrap, tidying the desk in the morning room, installing a printer, getting acquainted with the FitBit, going through a bin of accumulated papers and things. I was so virtuous on Saturday that I determined Sunday I would spend most of the day in the sewing studio.

First thing I did was make the binding for the two quilts that I left at the machinist earlier in the week. 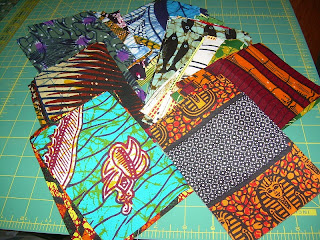 Then I cut a bunch of bricks for the Malaria quilt. Later in the afternoon I had a surprise visit from Bonnie, who was out for a walk and dropped by to give me some African fabrics that she had.

I have more than 200 bricks cut and it is time to get going on the sashing. I believe I have written this before. Stay tuned on that sashing.

While I worked, I did at least four loads of laundry. 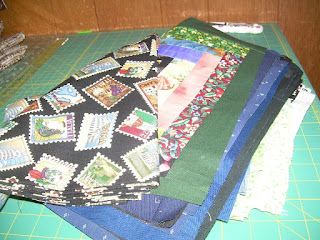 This picture is a group of twenty blocks for a charity quilt. They were made by a group of different people and I agreed to put them together, add a binding and backing and pass it along to my finishing partner, Bobbi, who has a long-arm.

The blocks are wonky log cabins and needed to be trimmed at an angle to be 12-1/2 inches. The postage stamp fabric will be the border; I believe I put a lighter green piece in the pile for a stopper before the stamps. This project is waiting for a day when a group sews together and there is floor space in abundance. 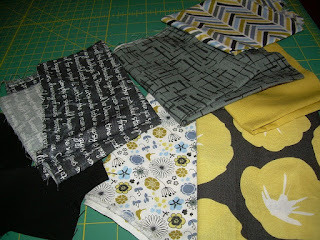 The guild is having a challenge for February and as far as I have gotten with it is to fondle the fabrics given out and to add some kona black.

What's the hold-up, you may ask? Well, the assignment is to paper-piece a block (or several blocks). I have never paper pieced and am a little intimidated by the idea of it. I promise: If we are fortunate enough to have a Snow Day this week (unlikely), the very first thing I will do will be this paper pieced project. If we don't have a Snow Day (more likely), then I will begin no later than Saturday. 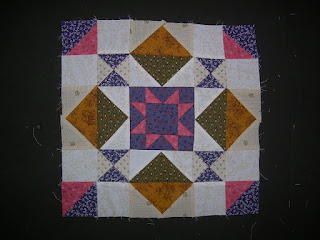 I pressed a couple of infinity scarves and got them ready to gift.

Perhaps the high point of the afternoon was working on my project for Lori's Quilt Along. This is the second time I've participated and have thoroughly enjoyed the process. Lori will provide her instructions for finishing the project, but I have some ideas of my own. First off, I'm going to take that little corner block off and put it on correctly. And then, I was thinking it might make a panel for a tote bag. Or perhaps I'll just hand quilt and bind it and let it be a little table piece. We'll see.

So that is the Eight O'Clock Report and it comes to a close now, which is a good thing because it's time for "Downton Abbey"!

Nann said…
You've had a productive day! I look forward to seeing the tipped log cabins and the malaria blocks as you progress on those projects.
Sunday, January 27, 2013 10:57:00 PM

Janet O. said…
That is some report, Nancy! Talk about having many irons in the fire! Abundance looks great with that splash of purple. : ) It would make a great tote bag. I'll be interested to see what you end up doing with it.
Monday, January 28, 2013 12:01:00 AM

Barbara Anne said…
Wow! You really accomplished a lot over the weekend and you may color me envious at the energy you had and all you did. I'm tired just reading about it all!

Love the quilt fabrics, your idea for the donation quilt that will have the stamp border, and the star for Lori's quilt along. Stellar!! (okay, bad joke!)

Paper piecing is easy, but you'll need to keep your mind on what you're doing. Fret not!