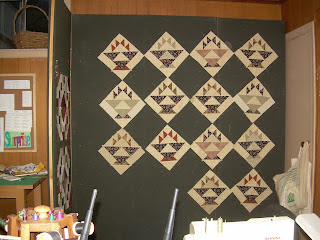 Both of my on-line quilting groups do a similar project where each month one participant sends out fabric or fabrics of her choice and requests the others to do something specific in making a block or blocks for her.

April was my month for the FQ (betcha can't guess what that stands for!) group. I had this gorgeous piece of black CW fabric and several coordinates that I'd bought prolly five years ago, at least, when I was out at the Old Country Store in Intercourse. It had been languishing on the shelf. I hauled it out, decided on the Flower Pot block and sent black, background, and one coordinate to each participant, asking her to make me two identical blocks. As y'all might recall, April was a bit of a busy month for me, between the election, the hiring season, and the church committee. So no one at all was surprised when people began emailing that they didn't have enough background fabric. They asked if they could fill in with something similar. I said sure. So some did. Some made one and a portion blocks and sent them back for me to finish. Some of the ones who supplemented with their fabric sent me additional of that fabric. Last night I got out all of the blocks that have come in thus far, finished a couple of the incomplete ones (with one, of course, that needs some frogstitching later tonight), and am loving them. The scrappiness of the supplemental fabric makes them just splendid. Also, I gave inconsistent instructions on fabric placement, so some used the black for the basket base and others used it for the top spikes. Again, serendipity! These blocks are wonderful. There are perhaps six or eight more to come in. I'll prolly need to make some to come up with an even and manageable number. And decide what to do with the alternate blocks (since I surely will not have enough of the original background. I'm just hummin' as I gaze upon 'em. Meadowbrook Farm, aka I Must Have Been Crazy, is in great shape. All twelve blocks are finished. (How 'bout yours, Nicole?) They went together like a dream. I'm ready to put the border on, but unfortunately lack a CW stripe which the pattern calls for in the border. I could use something I have, I suppose, but have come to like the stripe and would like to learn to miter the corners on that border. So these blocks are on hold until I can -- oh, dear! -- get out to the LQS to find something.

Meanwhile, Hot Summer Hearts (the graduation quilt for Jill) and Leader-Ender Jewel Box (the graduation quilt for Sarah) have come back from Branky. She did such nice meandering on them. Jill's involves a heart-meander that is just perfect. Sarah's is simpler, and also just what the quilt wanted. One of the tasks for the weekend will be to get the binding pieced and machined on them. Graduations are June 11 and 12 respectively.

Batik Baskets on Black and What Was I Thinking? are heading out to Kat tomorrow for machine quilting. She lives near Chautauqua, where we will be spending a week at the end of July, so I will pick them up from her at that time.

Pictures of all completed quilts will be promptly posted.

Tomorrow: Name That Quilt Give Away!

Tanya said…
Your Civil War baskets are wonderful. It sure sounds like fun to be part of a on-line stitching group! I can barely get my own quilts/blocks finished though and I'd hate to mess up someone else's project by not sending in. One of these days! The colors in the basket are so nice and the way they aren't exactly the same is very pleasing!
Friday, May 23, 2008 3:10:00 AM

*karendianne. said…
MEANWHILE? I can't get that far. I didn't read a thing after that. I'm trying to contain myself, to be good here becasue...

You're teasing me and torturing me with these fantastical baskets (which normally I strongly dislike) and then what is up with those Meadowbrook Farm blocks? Good Lord. You're AGAIN lucky I'm too far away to get to you.

Nicole said…
I love a basket quilt! The Civil War flower baskets are so lovely. How could anyone not like baskets?
Thanks to you, I brought out my Meadowood Farm project box and reassessed it. I think I put it away because for some reason I thought I had to cut, then sew, one block at a time. I need to just spend a couple of hours cutting, the assemble the blocks. If I just stream line the process, I should make some progress. The colors I chose are so summery and I do love the block. So, here I go! Thanks for the gentle prod!!!
Saturday, May 24, 2008 11:38:00 AM