Three O'Clock in the Morning: Who Ya Gonna Call? 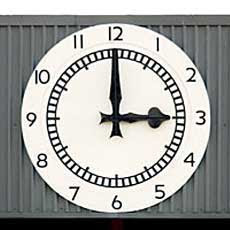 It was way back in the spring of '72. We were living in Kent, and Joe was in the first year back in college after a four-year U.S. Navy hiatus. It was three o'clock in the morning when the phone rang. We were young and naive, despite the Navy experience, and hadn't yet learned that a 3 a.m. phone call was always something bad. As I reached for the phone, I believed it to be a wrong number.

It wasn't. It was Jane, our neighbor two doors to the left. She and her husband were on the faculty; neighbors, not friends, though we'd had dinner together a couple of times. They were at the hospital in the next town; her husband had spent much of the night at the Emergency Room and when he was ready for release, the car wouldn't start. She just wanted to get him home and into his bed. So she called to ask if I could come to get them.

When I got there, her first words were, "I'm so sorry to get you out of bed at this hour." And my response, without even thinking, was, "Jane, I'm glad you think I'm the sort of person you an call for help at three o'clock in the morning."

Three o'clock in the morning: Who ya gonna call? I've always known it could be Bonnie or Honna. Not that I ever thought about it all that much.

I write this post to tell what I have learned: In the past two days, I've learned that there are many more. People have been wonderfully, amazingly supportive. They've offered prayers, meals, shoulders, errand running, and "anything at all, any time." They've respected my need not to have to answer the phone, and used good old email. They've been there with a touch, with an ear, with a glance. Some are the ones you would anticipate, the old friends, the people from church, the family. It is heartwarming, to coin a phrase. I'm so grateful.

Others are blog friends from across the U.S. and across the world. Prayers from Japan, empathy from Britain, cyberhugs from California. Late last night as I sat with the emails, I came to one from a quilter in Florida, someone I've "known" for only months, never spoken with, and yet there is this strong connection, this bond. I read what she'd written and the tears came again, healthy tears as Pat had told me. I thought, "She is someone I could call at three o'clock in the morning." I felt blessed.

paront1222@comcast.net said…
Oh Nancy...prayers are coming your way for a speedy recovery for your hubby......

Bobbie Bentneedle said…
God's blessings on your dear one, and on you. I have a wee book given to my mother when she was facing her last illness, called "God Works the Night Shift!" So, I'm sure you know - even when it seems the darkest, and loneliest, He is always there with you.
Monday, May 26, 2008 3:07:00 PM

Guenveur in Kent said…
I am so glad that you are coming up for air and that your friend in the choir was there to do for you what so many of us far away were not able to do in cyber space. Give old cranky pants a hug for me and tell him I'm glad he is doing well. And no more butter for a while.But red wine is good.
Monday, May 26, 2008 5:22:00 PM

The Naturalist's Daughter said…
I have just caught up on your blog. What an awful time you and Joe have been through. So glad to hear that He is doing better. And I am equally glad you have such great friends and support there when you need them. Hugs to you both. You both will be in our prayers.
Tuesday, May 27, 2008 12:11:00 AM

Sherry said…
Nancy, I will add my prayers to all the other ones for your husband (and YOU also). . . God will watch over you both during this stressful time.

Nanette Merrill said…
Nancy my prayers are with you and I am sure he will have a complete recovery. Isn't modern medicine wonderful. And friends and family. It is great to have people you can depend on.
Tuesday, May 27, 2008 1:29:00 PM