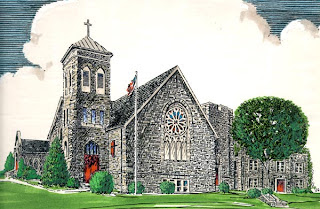 If you were familiar with Near Philadelphia, you'd see this picture and ask, "Why is this Methodist Church on this Lutheran woman's blog?"

Though we are no longer Methodists, this is the church where we were married forty-one years ago today.

It was a small wedding, on a Friday evening with candlelight. I wore a short white dress, Honna a similar short yellow dress, and we served our guests icecream and cake at my mother's home following the ceremony.

We'd gotten married quickly and suddenly. Too quickly and too suddenly, it seemed; my aunts suspected The Worst.

But, you see, this was at the height of the Vietnam War. Joe had spent the previous academic year at Kent State with his draft board breathing down his neck. The day after he got home from school, he went for his physical and was told to expect a letter the next week from the United States Army. Without a college degree, he'd be sent to basic training and to 'Nam right away.

The Navy Recruiter provided an option. Enlist for four years (instead of the two required by the draft), serve as an illustrator/draftsman, and be spared Danang. Furthermore, there would be a 90-day delay in reporting! He signed on the dotted line and called me from the nearest payphone. "How soon can we get married?" Three weeks seemed to be the minimum if we wanted anything more than an elopement.

My mother rose to the occasion. We put it together. Karen even managed to squeeze in a wedding shower.

We put it together. And stayed together. A honeymoon of two nights in Lake George Village was what we could afford. It was wonderful.

In October we learned that the recruiter had been less that totally honest -- the illustrator/draftsman position was by no means a done deal; Joe had to compete with hundreds of other applicants for the one position that was available. Miraculously, he landed it. And we were spared Danang; we spent the four years in the South, in Pensacola, in Norfolk, in Charleston -- those great Navy towns. I held a variety of peculiar jobs, Joe progressed in rank, we acquired a cat and a dog, and counted the days.

Four long years later we were still together and headed back to Kent State where he finished his B.Arch. and stayed on for a Master's and the first baby finally showed up. And so forth, and so on. The first thirteen years we were married, we moved thirteen times. Finally in 1980 we moved back to Near Philadelphia, where we've been ever since.

Together. The threatening Widow Maker has subsided, perhaps gone away completely . My fears of a few weeks ago are put to rest. Thank God.

Forty-one years. And anticipating many more.

Karen said…
You made it! Congratulations. May GOd grant you many more years together.

Bobbie Bentneedle said…
Congratulations to both of you. Happy Happy Anniversary... Wishing you many more years of living like today is your last ;0}
Bobbie in Texas
Monday, July 21, 2008 9:41:00 PM

LoieJ said…
Nice story; good marriage. Congratulations. We also made a quick decision to get married and I'm sure tongues clucked. It took 6 years to get the one and only birth child.
Monday, July 21, 2008 10:29:00 PM

Teresa said…
Congratulations! LOL - I just erased a long statement about Vietnam War and politics in general as I did not want to start a big conflict on your site. I am so happy that you have had 41 loving years and wish you many more.

Juliann in WA said…
What a lovely post. I hope that the fears that have been haunting you will continue to fade. Peace friend.
Tuesday, July 22, 2008 9:37:00 AM

debijeanm said…
Congratulations all around. I'm so glad the dark cloud has dissipated. You seem to be a person who fills her life with all the wonderful things that she can so I'm thinking good thoughts for you to have many wonder filled years to come.
Tuesday, July 22, 2008 11:04:00 AM

Tanya said…
AND CONGRATULATIONS!!! A lovely story and so nice to know that even quickly planned weddings can be celebrated for 41 years and more!!
Wednesday, July 23, 2008 6:34:00 AM

NoVA Dad said…
What a marvelous story; happy anniversary to you, Nancy (although a bit belatedly at this point). Hope you have many more years together!!