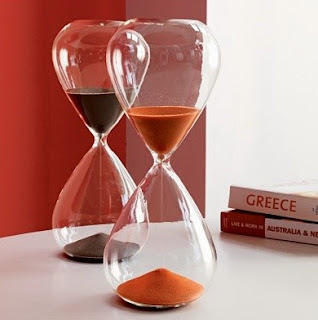 This is a difficult post to write. But I need to do it, nonetheless. Honna would say it is in the category of "preventive worrying."

When I was 15 and my father was 49, he died very suddenly of a heart attack. For the next 25 years, I honestly believed that I, too, would die when I was 49. There was no sense to this belief; it was some sort of negative magical thinking. My better judgment told me that to be true. But I could not let go of that belief. I lived a very busy life, trying to cram in as much as I could in the time I had.

The night before my fiftieth birthday, I went to bed believing that I would not wake in the morning. When I did, my very first thought was the trite, "This is the first day of the rest of your life." There are days when I remember that morning, and think, "This is a bonus day! You didn't expect to have today!"

Not quite a year ago, at the time of our fortieth anniversary, I wrote this post where I referenced the fact that my older sister's fortieth wedding anniversary had been their last. Both she and I married at 22. Both of us married tall, handsome redheads. She and Bob had 40 years together.

In the past six weeks, since Joe had the heart attack, the negative magical thinking has kicked in once again. I wake in the middle of the night, harkening back to that night at the emergency room, and the knowledge that Bonnie's 40th anniversary was the last takes over my mind. I tell myself I am being silly. I didn't have to do what my father did; and, what happened to Bonnie and Bob will not have to happen to Joe and me. When this comes to me in the daylight, most of the time I am able to put it aside, to recognize it as negative magical thinking. Most of the time. But not always. And not very often at all in the night.

There are two weeks by the calendar until our forty-first anniversary.

The ER doctors said, "What you had is what we call the widow maker."

Lord God, sustain me through these two weeks. For I am foolish and I am frightened.

Three Birds Inspired said…
Fear sneaks up on us in the dark and quiet. I pray that you find a measure of peace in the next few weeks.

Bobbie Bentneedle said…
Just remember, "God works the Night Shift" - ALL NIGHT, EVERY NIGHT. I love that little book by Ron Mehl, and one of his little lines that says "Heaven's Help Line is open 24 hours a day, and it's never answered by a nasal voiced part-time angel and you never get Voice Mail because God works that switchboard Himself - even on the Night Shift!"

My thoughts and prayers are with you - and I'm sure that there are many more of us whose prayers are calling the Help Line, and asking that He keep a Special Eye on you and yours, especially on the Night Shift!
Monday, July 07, 2008 8:46:00 PM

*karendianne. said…
It is only the fool that isn't frightened. Because now it has a label and it is called "fear" and we know what to do with words, labels, expressions.

We put them on the page. We share the fear, reach out to friends to help shoulder the label, and together we tell that Fear just how Big our God is.

Ancestor Collector said…
Oh, those night time fears. Little worries are monumental in the dark of night, aren't they? But God has a big surprise for you....more than 40 years! He's just going to remind you once again who's in charge! ;-)

Lindah said…
I understand your fear, Nancy. 62 was the year I feared. Daddy died at 62. I passed that hurdle some years back. Now my youngest brother is there. "My times are in his hands. Ps 31:15" Cling to that verse. Nothing can take you or DH too soon or too late. It will be at the right time because your times are in God's hands. None of us knows when, but we can rest because it is all in his loving, sovereign hands.
Peace to you!
Tuesday, July 08, 2008 12:50:00 AM

Gretchen said…
Maybe doing something symbolic to get rid of your fears would help. Like writing them down then burying the paper in the yard or (safely) burning the paper or something like that. Begone bad thoughts! Just a suggestion. Stay strong, this too shall pass. Best wishes and peace to you.
Tuesday, July 08, 2008 1:24:00 AM

Unknown said…
They always say that 3-4am is the lowest point in the 24hrs. Apparently more people pass away at that sort of time of day than any other. So it's not surprising that you feel at your most worried and vulnerable in the quiet of the night when all around you are sleeping and you're unable to voice those fears and concerns without disturbing those sleeping around you. I've no doubt that just sharing your fears on this forum and receiving the support from the rest of the blogging community goes a little way to helping - but it will pass, it is still all part of your reaction to the monumental events which have taken over your life this past few weeks - again be gentle on yourself (((hugs)))
Tuesday, July 08, 2008 3:23:00 AM

LoieJ said…
There has to be a happy medium between being realistic that we will pass away, on to be with Jesus, and having paralyzing fears. Live like you'll live forever but also like today is your last day.

I haven't had those fears for myself, but I have them for my children, especially for my son. It happened again the other night. I was sick with worry; I could feel it as I was "trying" to sleep. I was even too fearful to pray. I know that those worries accomplish nothing. It was a waste of time and fear hormones! And I wasted a time I could have prayed for the Peace the Passes Understanding.
Tuesday, July 08, 2008 8:44:00 AM

Ms. Jan said…
Your name is legion. Greyhair's father passed on at 55, presumably from "the Widowmaker" as no autopsy was done and it is not without a bit of fear that he approaches that milestone himself. Keep the faith, Sistah. You both will be fine!
Tuesday, July 08, 2008 3:31:00 PM

Mrs. Goodneedle said…
Nancy, put your fear behind you and your trust where it belongs... with God, he knows your fears and hears your every plea. You and Joe will have one huge and happy 41st anniversary!! Love abounds...
Tuesday, July 08, 2008 3:54:00 PM

Karen said…
I can so relate to this kind of fear.

What a glorious celebration your 41st will be!!

Praying for you to not be fearful.

Tanya said…
Actually, I think many of us feel the same way as you do though maybe we haven't have hard situations thrown at us as you have these past couple months. I was thinking this morning that what with my husband's poor eating habits, 16 hour work days 6 days a week, next to zilch exercise that our days may be shorter together than we'd like. But he is an adult and my nagging only makes our hours together unpleasant. Night time is the worse... but God does is always on our side. I have my own mantra, "God is in control... God is in control."
Wednesday, July 09, 2008 6:07:00 AM

SallyB said…
I know what you're going through. I am dealing with my own stresses and fears about my own medical issues, so I can certainly understand your fears for Joe and what you both went through with his recent heart attack and the sudden death of Tim Russert from basically the same thing that Joe had. Take things one day at a time, one small step at a time, day by day. Remember that you have Joe by your side while Russert's family wasn't so fortunate. Count your blessings, day by day. I know, sounds trite, to be sure, but it's all I can think of saying.
Wednesday, July 09, 2008 2:25:00 PM