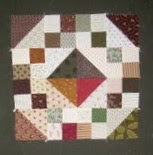 So many people have shown interest in my Jewel Box that I thought I'd write a little lesson on how to do it. If you look at the picture, you can see one Jewel Box block. I had a different picture at first, but Karen was good enough to crop it for me so that only this block shows. Thank you, Karen!

The first thing you want to do is go here so you can read and understand the whole leader-ender concept as developed and explained by Bonnie Hunter.

The next thing you need to do, the most time-consuming part, is to prepare your fabrics. I wanted this project to be very scrappy, so I used lots of different fabrics, most of which were left-overs from Civil War projects.

The darks are mostly CW repro left-overs, although I did buy some FQs and I did throw in some non-CWs to make it a little more interesting. In a couple of places my darks aren't really all that dark. I used various reds, browns, tans, greens and an occasional purple for my darks. The darks were also cut into squares that were 2.5" and 4-7/8". No specific number of squares were cut. The 2.5" squares went into the bin with the lights and the larger squares were set aside.

Now, this next step is crucial! I have an obliging husband who likes to watch TV in the evening. So I set him up with the pile of 4-7/8" squares, a ruler, and a pencil, and had him draw the diagonal line on the back of each light square. I'd run out of squares by the time he was in the hospital, so one day I cut a bunch more and took them there for him to draw the lines! A cooperative husband or a friend who owes you a favor will get you through this step very easily; lacking those, you'll need to draw the lines yourself!

Next you take all of the 4-7/8" squares and put them in a bin. So, as you are sewing on whatever you are working on for your real project, each time you need a leader or an ender, you reach into one of the bins and pull out a random light and a random dark square. And you sew them together. The small squares go very quickly -- you can even do a couple instead of one as a leader or an ender. The larger ones take a little longer since you have to do your quarter-inch stitching line on either side of the drawn line. And I usually take the time to pin these together so they'll be more accurate.

As you clip off your leaders and your enders, you put them in a little pile and when the pile becomes medium-size, you press everything. The large HST blocks go into a basket and you take the little pairs of dark/lights and put two pair together to make a 4-patch -- you do this as leader-ender, too, accumulating them, and when there are a pile you press them, and put them in the basket.

At some point the basket will have lots of components in it. When this happens, you take eight of each component and arrange them on the design wall in the Jewel Box pattern. And you sew the components into rows, using them as leaders and enders. And, of course, the rows become great big leaders and enders as you complete them into blocks!

The blocks all get set aside and it is fun to watch that pile grow. When you think you have enough, you lay them out and make a pleasing arrangement and sew them into rows (I did this as a leader-ender, too!) and then the rows into a complete top.

You don't have to plan ahead and cut a precise number of squares. You just cut until you are tired of cutting or your blade gets dull. When your basket of squares starts to run low and you think you want more blocks, you simply cut more squares!

The Jewel Box that I saw on the fabric shop wall that got me started on this was three rows of three blocks; it was a wall hanging without any borders and was very nice. This size made of kiddy fabrics would make a right nice baby quilt. The first Jewel Box that I made was a gift for a graduate and I made it 5 blocks by 5 blocks so she could use it for a nap. The most recent one is 3 blocks by 4 blocks plus a border.

If you decide to make a leader-ender Jewel Box, I hope you'll send me pictures!

Mrs. Goodneedle said…
The quilt looks great, Nancy! Leaders-Enders for me were such a "lightbulb" moment for me! Bonnie is probably bustin' her buttons with pride over this post!! Well done.
Thursday, July 10, 2008 11:13:00 AM

Karen said…
Nancy, thanks for writing this out. As you know, I have started a Jewel Box quilt, inspired by yours.


Check your email, I cropped the picture for you.

Anonymous said…
hiya, love, love, love this jewelbox quilt that you are creating here! I am thinking of creating one myself now that I've seen yours! Being from the Netherlands, I wonder what kind of fabric you mean with shirtings.... call me stupid, call me dumb but I realy don't know what you mean... lol.
(*ü*)
Friday, July 11, 2008 7:33:00 AM

Tanya said…
I really love your jewel box quilt. The colors you've used are so rich and beautiful. I'm putting your picture in a "To do someday" folder. I have the leader/enders so you never know, if I could get a couple of my in progress done this could easily come up next!
Friday, July 11, 2008 5:54:00 PM