Images from a Cluttered Studio 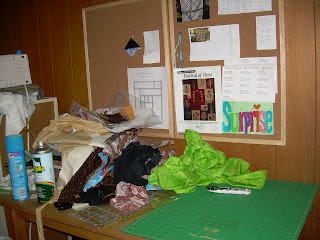 At this point in the afternoon on a hot July day, I lack enthusiasm for any of the chores, projects, delights on my list. I just want to sit here in front of the fan and sip a cool something. So while I do that, I will take you on a little tour of what is going on downstairs.

First up is the cutting table. Yep, it's there. Really. Trust me. See: There's the mat to the right. We won't talk about the heap to the left, will we?

Some weeks ago somebody or another posted a challenge for the messiest cutting table. I lacked the courage to enter. But, she said in her best Rocky Balboa voice, "I coulda been a contendah!" 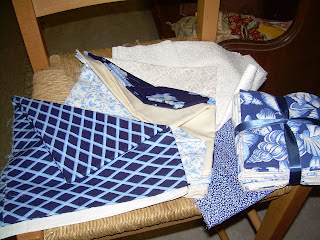 This chair is covered with the fabrics intended for my Living the Dream Quilt. I bought the ribbon-tied pack of FQs last summer, before I even knew about Living the Dream. We were on vacation in Onset and had taken a ride over to Hyannis to have lunch and visit the best quilt shop I've ever been to. I spent a bundle, if I recall correctly (and you just know that I do), and among my purchases was this stack of seaside themed blue and white Fats. They were designed by the shop owner and were irresistible.

I brought them home and they've been calling to me but without any specificity. And then it dawned on me that they were the start for Living the Dream! Supplemented with some goodies from the recent trip to Sauder's. 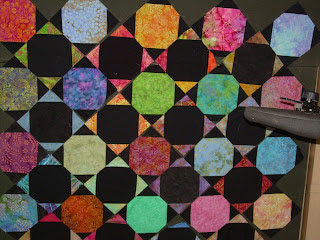 Once the Daiwabo Jacob's Ladder got off the wall and onto the floor (we'll get to that in a minute), the Snowballs somehow found out that the wall was empty and they set up such a hollerin' and a clammorin' to get up there that I couldn't stand the din any longer and finally put them up. Besides, Snowballs were a very nice thought on a day where the high Near Philadelphia is 90 or above.

They're all batiks and there's such a nice variety of hots and cools and this and that. Oh, my!

What I need to do next is calculate the size of the setting triangles and cut them and then as a Leader-Ender interlude, start getting the batik corners on them. These blocks are from a swap that is only about five or six months old. I think. 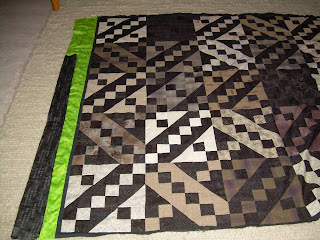 All right, here's what happened with wimpy old Jacob's Ladder. As you know, we decided to rename him Big Jake and apply an acid green border. It took just two sides of the border to make him more assertive, and, by golly, he's a presence to be reckoned with. The border, he said, was nice, but it was too much. He said he felt folks might question his masculinity. I asked him who was making this quilt, anyway, and he just sort of stuck his lip out. I cut the next two sides of the border and when one fell under the cutting table (see above) and I reached down to get it, there on the top of the boxes piled underneath was a grayish-brown Asian print I'd picked up on that same trip to Hyannis, thinking it would look nice with whatever I ultimately did with the Daiwabos. I've laid a folded piece on one portion of the acid green to see how it might look, and Jacob practically purred. 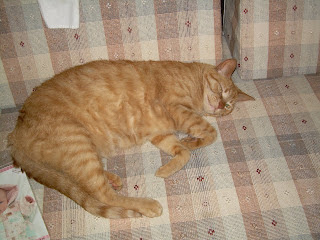 Speaking of purring, here's Bodacious, back on that sofa. I'd moved him off earlier because he was sprawled on the Log Cabins, who were patiently waiting their turn to be bordered.

Weekends are exhausting for him; he just doesn't know how to contend with having the two of us home all day for two consecutive days. Interferes with his sleep, it does.

Teresa said…
What a rowdy bunch of quilts you have, LOL..Love the blog. That lime green looks great on Jacob as well as the outer border fabric. Stay cool!
Saturday, July 12, 2008 9:26:00 PM

*karendianne. said…
Those snowballs are yummy~! How fun. And I'm very very happy to hear the Cabins are coming to life somewhere there in your "Images from a Cluttered Studio." Does Bodacious miss them? Poor Bodacious. Its very hard being a kitty. I understand. Pooor kitty.