The Great American Fourth of july 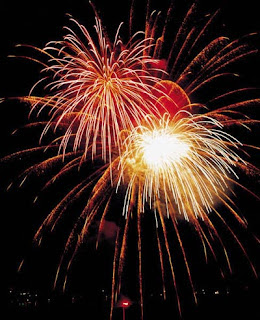 If there is one thing my town Near Philadelphia excels at, it would be the Fourth of July. Andrew was reminiscing about it to the point that he decided he had to be here this year -- he's leaving D.C., home of the fireworks spectacular, to come home to his memories. Amy's in for a treat.

When our children were growing up, Fourth of July was celebrated all day. It began with festivities for the kids down at the biggest park. There would be a decorated bicycle competition -- remember crepe paper, anyone? -- and then traditional games like the three-legged race and the peanut scramble. All of this was followed by complimentary hotdogs.

We'd return home and get something cold to sip and put on the television and all get in front of it. There was a program our PBS station would show every year mid-day, "The Great American Fourth of July and Other Disasters." We just loved it. Written and narrated by Jean Shepherd, it told the story of a midwestern family's Fourth of July. Each of us had a favorite part: Tom was smitten with Miss Junior Corn Blossom, Sherry enchanted with the drum major, Duckworth, Joe with the pyrotechnic-crazy father, and me with the mom who had sent all of her washrags off to a Mrs. Y. Y. Flurch of Fichigan, Michigan, as part of a chain letter scheme. Andrew seemed to have no favorite part; he'd sit enraptured through the whole thing. I've no idea why PBS stopped showing it.

After a while it would be time to put on swimsuits and head out for the township pool where there were special games, complimentary ice cream, and coins thrown into the medium pool for the kids to dive and retrieve.

Cooled off, we'd come home and change our clothes and go claim a shady spot in front of the elementary school well before the parade was scheduled to begin. The parade was an amazing thing, with more fire engines than anyone could imagine. Sherry used to make a chart listing the fire company, the number of vehicles, and the color of the trucks. Seems to me that one year there were 72. String bands, fancy-move motorcyclists, Irish dancers, VFW units, clowns, stilt walkers, floats -- you name it. We had it. Vendors along the side of the road hawked cotton candy, huge balloons, and plastic swords (it just occurred to me that a new sword may be what Andrew is coming home to acquire!). The extravaganza generally lasted about two hours.

Next, we'd go up to Carol's. Her husband, Bill, says he was not born on the Fourth of July, but he might as well have been. A member and driving force of the Greater Near Philadelphia Patriotic Association, Bill recruited the acts for the parade and hosted a marvelous pot-luck picnic after it ended. There would usually be some entertainment at the picnic, too.

Stuffed with traditional picnic fare, we'd trudge the few blocks up to the high school with blanket and lawn chairs, needing to get precisely the right spot for the fireworks. Ice cream vendors and those selling glow-in-the-dark necklaces populated the hill. The fireworks were always amazing, and you would think that was a perfect ending to a perfect day.

But you'd be wrong. Because we always walked back to Carol's where there would be a red, white and blue cake with candles, and we'd all sing "God Bless America" before going home, feeling so darned good and so proud to be Americans.

Things have changed only a little. We don't partake of the early daytime activities or the pool fun any longer. Now we have Sam and Caroline to take along to the parade. And since we moved nine years ago, we are one block away from the high school. So the pot-luck picnic is at our house, and everyone brings chairs and blankets and we all sit on our very own front lawn to watch the fireworks. And Joe, after all those years of watching "TGAF4OJAOD" now emulates his hero -- he stops at a roadside stand and picks up fireworks that he sets off in our yard during the interval between the picnic and the show from the high school.

This year he's cooking Johnsonville Brats and chicken on the grill. Marsha's bringing a salad and Paul, as always, will bring the beer. We have about a dozen adults coming to picnic and each will bring something delicious to share. I'm certain Bill will put in an appearance to grab a brat sometime beween the parade and going up to supervise the fireworks. It's gonna be grand.

And, don't tell Andrew, but there's a special treat in store for him: On Ebay I found and won a home-downloaded copy of "The Great American Fourth of July and Other Disasters."

Teresa said…
OH, how much fun it all sounds. I would like to see the show as well. It just sounds like you have a wonderful family with lots of fun memories and more to come.
Friday, July 04, 2008 6:25:00 AM

Guenveur in Kent said…
But the washrag thing is from Vic and Sade a wonderful old radio program which obviously influenced Jean Shepard. Uncle Fletcher would talk about Jane Blaine from Plaine, Maine. Vic belonged to the Sacred Stars of the Milky Way. Sade was always going to the wash rag sale at the local department store. I have two books of scripts and a bunch of audio tapes. It was brilliant.
Your 4th of July sounds like fun but exhausting.
Monday, July 07, 2008 11:22:00 AM