I took some time this morning to photograph the items for the give-away. In the grand scheme of give-aways, this one is not a grand and glorious one; it is mostly things that I have purchased or been given and I know I won't use. There are five give-aways, one for each 100 posts.

If you want to enter the drawing for one of the give-aways, leave a comment and indicate by number which give-away you would like to win. I'd love it if you would link my give-away to your blog. The time to Comment will end on Saturday, July 26, and winners will be announced shortly thereafter. Give-away items will be mailed early in the week of August 4. 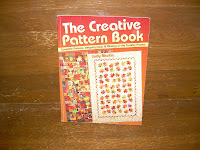 Number One is Judy Martin's Creative Pattern Book. This absolutely wonderful book contains the pattern for Shakespeare in the Park. Somehow I have two copies, and I certainly don't need both.

Don't you want to make a Shakespeare in the Park? Here's a picture of Amy's. I certainly do, and have hopes of beginning it sometime during the coming winter. 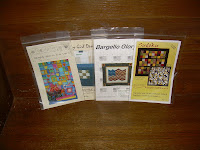 Number Two is four patterns that I either was given or purchased. Raggedy Hearts is often made out of flannel, and I've seen it at vendors' booths at the Lancaster Show and always thought it was cute. At one time I thought I would make one. I don't think so any longer.

There are also patterns for a patriotic bargello, a sewing machine cover, and a Sudoku wall hanging. An interesting assortment. 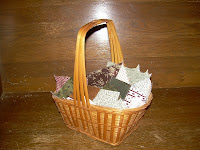 Number Three is a head start on your own Mostly Civil War Jewel Box quilt.

There are enough HSTs (or ingredients for them) to make a dozen 16" blocks -- each block contains eight of the HSTs and eight four-patches. There are a few of the four-patch units and lots of precut CW squares for the four-patch units. You'll need to add some shirtings and possibly some additional squares and borders, if you want them. Your finished project will be this size.

I've loved having this as a leader-ender project, but two similar tops is enough. It's your turn! 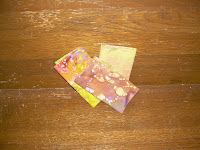 Number Four is three FQs of hand-dyed/batiky fabric. I won them at a quilting day and they have been sitting on the shelf looking at me, begging to be used, and I just don't foresee that happening.

It isn't that they are badly behaved or not-nice fabrics. They are pretty and pleasant and just don't seem to go with anything else that I have. But perhaps they are exactly what you need to add a little zing to something you are working on. Number Five is three more patterns. All are sort of folky. One is about cats.

The other two are about houses, and the one with buttons makes me think of Juliann -- I could just see her making something terrific with it.

So there you have it. Five different small-scale give-aways, one for each of my 100 posts. Leave a comment with the number of the one that interests you, and good luck!

Bobbie Bentneedle said…
Trust my taste - I love the same one everyone else does... Pretty please, put my name in the hat for #3! (Not that the rest of your giveaways are not great, but I absolutely love the Jewel Boxes you made and need to get more in the leader-ender habit)
Congrats again on your 500th post!
Saturday, July 19, 2008 2:09:00 PM

~Tanner said…
Thanks for such a great blog, and congrats on 500 posts!! WOW!

antique quilter said…
congrats on 500 posts I just find that amazing!
wonderful give aways!
I Love your quilt and would love to make one too and to have a jump start with no. 3 would be wonderful
thank you!!!!
Kathie
Saturday, July 19, 2008 5:58:00 PM

Sue Cahill said…
Congrats! You are being more than generous. I would love to be entered for drawing #3 most of all but all the prizes are wonderful.
Sue Cahill (sbonetsue at yahoo dot com)
Saturday, July 19, 2008 7:07:00 PM

I will post a link on my blog for you

debijeanm said…
Civil War? Wow, you got me. Historian, ex-reenactor. Please add me to the draw for door number 3.

Brenda said…
Congratulations on reaching 500 posts! I'm so happy to have found your blog. Please enter my name for the #5 giveaway; I'm all about the little houses and love Alley Cat Tales patterns.
Thanks for hosting such a great giveaway!
Sunday, July 20, 2008 8:30:00 AM

Unknown said…
What a need bunch of things to give away.I'd love to try and finish up the civil war quilt. So put my name in the number three drawing please.
Sunday, July 20, 2008 12:06:00 PM

Tanya said…
Thank you Nancy! I was looking for that book this summer but never came across it. May I get my name down for number one? You know how I've admired your jewel box quilt but with all the fabric I have in my drawers you'd think I'd get around be able to make one of my own someday... And batiks and cats. You have hit my heart in so many ways! And I'm so glad to know that your life is off the holding pattern and that your dear hubby is doing well. And happy anniversary!
Sunday, July 20, 2008 8:15:00 PM

Shelley said…
Limited to one? So hard to choose....but, being somewhat smart (NOT), I'll try the number of the least asked for #4. I would be happy with any of them. My first choice would have been for the book...I do love that shakespeare in the park...I HAVE TO MAKE ONE OF THOSE! Even the patterns would have been fine since I could pass them on to some friends I started teaching how to quilt this past winter. So, I'll stay with #4 .... but my greediness wants #1 hehe. Love your blog
Thursday, July 24, 2008 4:17:00 PM