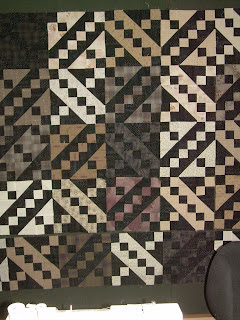 Well, I've got trouble in the studio. Trouble with an upper case T, to coin a phrase. It all started with my making the list of five projects to finish by the end of July. Silly me, why did I do that? Could I not have quietly worked on one WISP at a time until five were finished? Without making a list? Playing favorites, in a manner of speaking?

With two of my finishes now history, it was time to deal with the Dreaded Dull Jacob's Ladder.

Laid him out, rearranged him, consulted with DH who rearranged further and we decided he was as good as he was going to get. Got to work on making rows with the Jewel Box as a leader-ender.

All went well for approximately three minutes. Then those Log Cabins got restless and started squirming and wanted some attention. 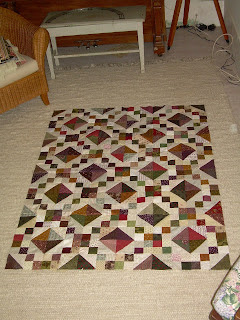 So I slipped a couple of them in as a leader-ender-to-the-second-degree kind of thing.

Not my smartest move, it turns out. Jewel Box would have none of that. She started pushing and shoving Jacob demanding to be finished first, to not remain a leader-ender, now that Cabins had shown up to fill that role. I tried to explain my plan, but she wasn't buying it.

Dumb, dull Jacob didn't seem to care, hanging there quietly on the wall, so I relented, and moved forward with Jewel Box. Jacob then all at once starting to look very sad and rejected, sticking his lip out, and the Cabins got noisier and noisier. It was like I was running a first grade for recalcitrants and clearly I had lost control of my class. I knew I wasn't cut out to be a teacher.

When the heck was recess, anyway? 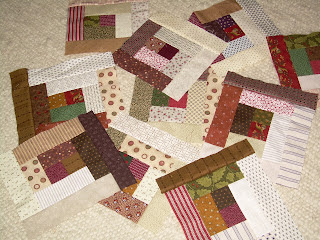 The Cabins got ever more insistent, claiming that they didn't want to be a leader-ender project: they wanted to be real. I swear, I felt like I was talking to the Velveteen Rabbit, if you get my drift. So I went back and forth with Jewel Box and the Cabins (hoping no one would raise a hand and request to leave the room), with just one row of Jacob getting together during all of this mayhem, and finally Jewel Box was assembled and looking good. She says she wants a border so she's special, since the first leader-ender Jewel Box did not have one. I don't know whether to indulge her with this or not. Opinions welcome.

The chaos finally got to me. I left Jacob sulking on the wall, now claiming that he'd be a lot more interesting if he had a better name, and the Cabins tussling in a pile and came upstairs. The family has left for the parade and I have picnic preparation to do.

Wonder what kind of goings-on I'll meet up with when I return to the studio.

floribunda said…
I'm glad to know I'm not the only one who has arguments with my quilt blocks! Maybe Jacob would like to be jazzed up with a very thin border of acid green or red-orange? Happy 4th!
Friday, July 04, 2008 4:38:00 PM

InfinityQuilter/Knitter said…
That's hilarious! Actually I like dull Jacob. Yeah, Jewel Box I like you too, but I think she does need a border! Good luck! I can't wait to see what you decide.
Friday, July 04, 2008 5:15:00 PM

Bonnie K. Hunter said…
Poor Dull Jacob! At least he is not Dastardly Jacob and seems to be hanging on the wall just fine!

Charlotte is here with me and we are hooting at your post...what fun what fun! She also suggests that Maybe Jacob would be more appealing if we named him ROCKY...as in ROCKY ROAD! (as in ice cream?! But no calories!)Rocky Road has a much better ring and appeal to it than "jacob's ladders."

Happy Quilting! Now I know what kept YOU from attending the parade!

Ms. Jan said…
Frankly, I like Jacob and agree with Bonnie that maybe if you named him "Rocky Road" you might have a different attitude towards him. He's a very manly quilt.
Friday, July 04, 2008 7:37:00 PM

Tanya said…
You are so funny. Sort of like the gingham dog and the calico cat poem (I wonder where that came out of in my head.) I can imagine your quilts arguing together about their rightful place! Hey, tell Mr. Jacob that he is an extremely handsome guy. My type of guy for sure! A stay with you, remember forever type of guy!
Saturday, July 05, 2008 1:10:00 AM

alobsiger said…
Those projects better be careful! When my projects start to get all bossy, they get put on the BOTTOM of the to-do list! In any event, your projects are looking good from here! :-)
Saturday, July 05, 2008 8:35:00 AM

Bobbie Bentneedle said…
Maybe, instead of Dull Jacob, you could call "him" Big Jake? As everyone said, he's a manly kind of quilt, for sure. Now, hopefully, everytime you see "him" you'll think of John Wayne, and who could put John Wayne on the back burner for some old log cabins? (Of course, I'm sitting in a room with a plaster bust of "The Duke" that my DH contributed to our "decor") LOL... Seriously, I love all of your quilts - and agree that Jewel would like a border but am clueless about what, so I'm glad it's your decision instead of mine!
Have a fun weekend.
Saturday, July 05, 2008 9:35:00 AM

Karen said…
I love the Jewel Box quilt. Is that the name of the pattern, or the name you gave this quilt? I would love to make one.

*karendianne. said…
I'm just darn happy to see those Log Cabins. As a matter of fact I was so excited I almost jumped up in my seat and smashed my knees on the underside of the desk.

That excitement almost got the best of me!

Julie in the Barn said…
I'm not from Bear but I do pop in pretty regular. I'm the Twain Harte visitor. I live in conservative country and need to get a dose of liberal now & then to keep sane! Just figured it was time to leave a comment & say how much I enjoy your blog. Love the jewel box. I can see why she pushed her way to the front of the line.
Sunday, July 06, 2008 1:51:00 PM

Nicole said…
My goodness, I go away for a long weekend, and look what you have been up to. First of all, Jacob is not dull. He is elegant and restrained and will be an unusual (in a good way) addition to any decor. Do not be afraid of neutral colors. They are not only soothing, but go so well with other quilts in a room. You better not stall on getting this one quilted. He is stunning. People will never expect to see such a quilt and you will get raves over your brave un-use of color. It could end up one of your favorites.
Jewel Box is a gem as well! More on Log Cabins in my next comment!
Monday, July 07, 2008 12:32:00 PM