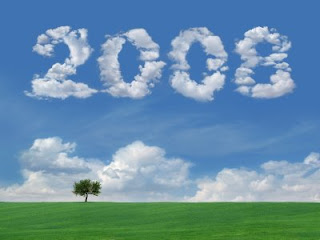 2008 was a year of good things. We celebrated its start together as a family in Richmond. I had the good sense to end a part-time transcription job. Joe had a grand opening of a new affordable housing project. Our church finally called a new pastor who will begin on February 1. Four of us had a private quilting getaway at White Oak. Anastasia performed an amazing solo in Harrisonburg. Caroline joined the family on March 1. My great nephew Scott married.

2008 was a year of difficult things. The economy. Joe's heart attack and the adjustments this brought. My cataract surgery, times two. Stress at church with a difficult interim pastor. The loss of our good friend Steve. The worry over our friend Caeli's liver failure.

2008 was a year of new things. I finally got a cell phone. We visited Niagara Falls. I joined a group at school that studies equality and diversity. We joined the YMCA. I finally made a jewel box quilt (two of them!). I became a political activist and worked on a campaign.

2008 was a year of intense sewing and quilting. I completely finished fifteen quilts. I brought fourteen more quilts to Flimsy stage. I abandoned one project that I wasn't enjoying. I traded away two projects that held no interest. Amazingly, I finished "What Was I Thinking?"

2008 was a year of deep thinking about priorities, about how to spend our time and our money. It was a year to focus on the family and to cut back on the overgiving at Christmas. It was a year of visiting with long-time friends and new friends.

And it comes to an end.

For better or for worse.

Naively, I wish my readers only good things in 2009. Would that it could be so.

Exuberantcolor/Wanda S Hanson said…
Expect good things and they will happen. That doesn't mean there won't be any bumps in the road, but postitive thinking is important.

YankeeQuilter said…
Sounds like a year with a lot of living! That is a good thing...

The television commentators are harping of all of the challenges for the year ahead...they forget some of these challenges will bring about some great achievements.

Quiltdivajulie said…
Someone asked me about 2008 and I replied that it had been a "mixed bag" kind of year ~ I suspect that fits for a LOT of folks and there will be more of it in 2009. Like Wanda said - positive thinking IS important and having the opportunity to share with our blogging compatriots DOES help! Best wishes to you and yours!!
Friday, January 02, 2009 1:45:00 PM

Tracey @ozcountryquiltingmum said…
I know, wouldn't it be great if everything was perfect...but then we would all be complacent, I think it is the struggles that make us realise we do not do this life alone, Cheers, Tracey
Saturday, January 03, 2009 5:52:00 AM