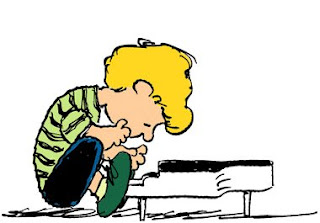 Today's Beethoven's birthday and I looked all over for an image of Schroeder at the piano with Beethoven's bust on top, but it wasn't to be had.

Joe and I have a Philadelphia Orchestra subscription, and six times each season we go with our [good friends and trusted] neighbors Maggie and Frank to dinner and then to the concert. We've been known to trade in tickets for other concerts in order to maximize our exposure to Beethoven and Schubert. This year we've been attending chamber orchestra concerts as well, and I became smitten with Beethoven's Seventh.

During the day, I keep the local classical station (WRTI Temple Public Radio) playing as background music. Besides being lovely company, the music prevents me and anyone else in my office from accidentally overhearing anything that may be said in the adjacent office of the school's head. Occasionally, usually in the afternoon, the connection gets weak or filled with static or quits playing altogether. When that happens, I tune in WKSU from Kent, Ohio, where we lived for much of the 1970s, and listen to their classical programming. The weather in Kent is vastly different from Philadelphia, and once in a while, I'll forget that I've changed the station, and be very startled by a forecast of "eight to ten inches of snow followed by freezing rain" as early as November!

This just arrived in the mail! Thanks, Leslie!

Yours for making beautiful music,