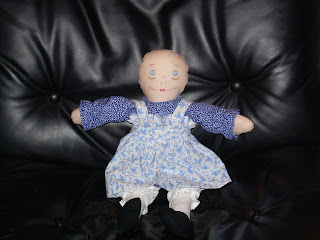 I've spent several hours this weekend making a Christmas gift for my granddaughter. When I was talking with Sherry a little while back about what I could get for Caroline, she said, "You could get her a dolly. Her other grandmother won't do that." Well, once I had the idea, nothing would do but for me to head off to Ebay for a duplicate of the Raggedy Ann and Andy pattern I had purchased when Tom was a tiny boy. I made him a Raggedy Andy and although it was 34 or 35 years ago, I have no recollection of it's being this difficult! The pieces are so small, the directions in some places are so awkward and the construction of the dress is downright preposterous!

The plan for the dolly was to give her Caroline's coloring -- a blue-eyed blonde. None of this red-red hair with black eyes. She's nearly done. Tonight I'll sew the snaps on the back of the dress. And tomorrow I'll get to Michael's for yarn to give her some hair. Right now she looks like a very pleasant and cheerful chemo patient. Makes my head cold just to look at her.

Stay tuned for a pic of the finished dolly. Tomorrow or the next day, depending on the ice situation outside.

The Naturalist's Daughter said…
She's looking gorgeous! Love the face and the clothes. Can't wait to see her with hair. Caroline is going to love her.
Monday, December 22, 2008 6:35:00 AM

Unknown said…
What a special gift you made. She is adorable! I can not wait to see the doll finished with hair. chemo patient....that was funny.

Guenveur in Kent said…
What a lovely present.Even bald she's cute. Did you make her a heart? We had a store bought one that got worn out because she was so great to hold and carry around. Sweet Caroline will love her.
Monday, December 22, 2008 10:46:00 AM

Leslie said…
What a labor of love. And I love her blue and white pinafore and bloomers. I think the fact she's'colorized' to match the family is terrific. Great job!
Tuesday, December 23, 2008 8:24:00 PM