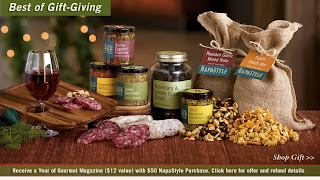 Yesterday I received what I hope will be my second-to-last email from Napastyle. While I was pleasantly surprised on my return home from my little trip yesterday to find the five small items that I had ordered from them back in September waiting on my doorstep, my pleasure turned to outrage when I opened my email.

Therein was a message indicating that the Major Item for Someone Important for Christmas, the item that I had ordered on September 29, 2008, was scheduled to be shipped to me on January 20, 2009 just nine days short of four months after placing the order.

I wrote back immediately, to tell them exactly what they could do with the item. That's right: Cancel it! And email me an acknowledgment that they had received my request and done what I'd asked. And, BTW, to stop sending me their catalogs (which in future will be marked "return to sender" so that they can pay the postage to get them back) and to stop sending me promotional emails.

You know, friends, the items in the NapaStyle catalog are very appealing. But if they treat all of their customers the way they've treated me, I can't imagine how they stay in business. I have located a replacement Major Item for Someone Important at a store not far from where I live, and this week I will trek on out there and pick it up.

And hence, I hope, comes to an end the experience of Nancy, Near Philadelphia, with the absolute turkey of a company called NapaStyle. Phew!

LoieJ said…
Given the economy, etc. and given the lessons you had the misfortune to learn from this encounter, it is a good thing to buy from the local stores and our friends and neighbors.

G'G'ma said…
I've been following your ongoing problem with "that" company. Have never seen the catalog but will trash it if one arrives in my mailbox!! The only mail order we've done this winter is with Land's End. Everything we've purchased has been on a sale day and on a "free shipping"day. The sizes and color have been right too.
Sunday, December 07, 2008 5:21:00 PM