The Attack of the Stealthy Shellfish! 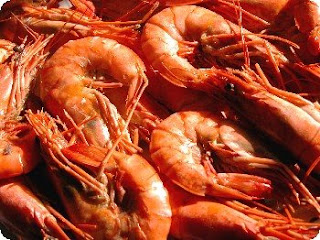 It hasn't happened in a long time.

Went out with Elaine and Carol to celebrate Carol's birthday last night. A restaurant that we've always liked had closed for a few months to redecorate and rework their menu and had reopened recently to excellent reviews.

And we could see why. The new decor is gorgeous. The menu is even more tantalizing than before and everything was delicious. Generous portions, but not over-the-top. Excellent service. Good wine, good meal, good friends. A splendid evening.

Until six hours after the food was served. Giving in to my weakness for risotto, I had the wild mushroom verson, and it was scrumptious. There was also a shrimp version on the menu, and apparently something went awry in the kitchen. Though there was no evidence of shrimp in my meal, apparently some mixing, some contamination occurred. For I was very, very sick all night, beginning precisely six hours after the first bite of food.

My type of shellfish allergy isn't the fatal kind, the one where the breathing passages close up or anaphalactic shock sets in. Mine is the other kind, the drawn-out gastrointestinal version (I'm sparing you the details). Suffice it to say it turned out to be a night spent mostly out of my bed.

I have a call in to the manager of the restaurant. Not to be ugly or nasty or to sue them, but because they need to know how important it is to keep shellfish spoons out of other dishes, and to tell diners if there is seafood broth used in a preparation. And because I'd like to be able to go back.

As I say, it hasn't happened in a long time. And -- with any luck -- it will be another long time before it happens again.

Yours for full menu disclosure,

Unknown said…
I am so sorry that happened...maybe he will read your blog like the computer guys did...LOL.

I know how miserable you must have been. Hope you are feeling better today.

Bonnie K. Hunter said…
OH No!!! I saw the picture first, and wondered what the HECK you were doing because I know you are allergic! I'm sorry this happened....I know how awful you feel when things sneak in like this.

Hope you are feeling better soon!

Ms. Jan said…
Oy, we feel your pain here in California. Those stealth ingredients can send His Greyness into the very same situation and it ain't pretty. Restaurants do need to be aware of the cross-contamination factor for those with food allergies/sensitivities.
Hope you are better soon!
Tuesday, December 30, 2008 12:34:00 PM

SallyB said…
Milk chocolate and I don't get along very well, so I know what it's like to have your digestive system mount a full scale revolt against something you've eaten.

Hope you feel better soon. This is most definitely NOT the time of year to feel lousy!

Guenveur in Kent said…
How awful for you! But your letting the management know may save someone's life. Bummer!
Hope you're feeling bett3er by now. I'd rather be in labor for 10 hours thatn have a gastrointestinal "event." At least you have something to show for labor.
Tuesday, December 30, 2008 6:17:00 PM

Tanya said…
Oh dear. I hope the restaurant apologizes and will figure out what went wrong. Some people have the dangerous type of allergies and the restaurants really need to be aware of the responsibility they hold. Good health to you in the New Year.
Tuesday, December 30, 2008 6:29:00 PM

Unknown said…
Thank goodness it wasn't the anaphylactic type or you might not be here to tell the tale - no excuse for sloppy kitchen practices though - hope your digestive system stops its revolt soon and you feel back to full health again
Wednesday, December 31, 2008 7:50:00 AM

G'G'ma said…
Oh, my. What a miserable ending to an evening. I haven't had scallops in 40 years. Had them 4 times before that and got deathly sick each time..up all night. I think I'm pretty fortunate not to have had any cross-contamination through the years.