Christmas Is a Season, Not a Day 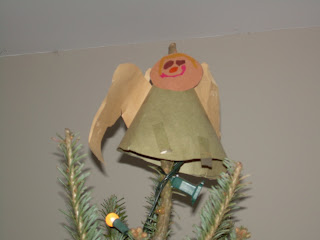 Someone admired this tree-topper. She or her twin sister has graced our spire each year since 1980. I've no recollection whatsoever of what we used before that. Sherry and Andrew each made one of these angels when they were in nursery school and we don't know which was made by whom. Doesn't matter.

We're still playing the Christmas CDs. I know that the radio and the malls and the everywhere play Christmas music ad nauseum starting around mid-November. And somehow I just tune it out. I'm usually very busy and can't just sit and listen and absorb the music. And besides I much prefer the versions that we have. And so from Christmas Eve on through New Year's Day, I continue to play them. And listen. And think about the words, the meanings. This year I've been particularly captivated by Enya's "Christmas Secrets," which is just beautiful and relaxing and inspiring. I'm going to listen some more late this afternoon while I work on my mitten applique swap blocks.

kdmade said…
Our tree topper was made by Sophie a bunch of years ago - - a star made out of popsicle sticks. It's kid-art at its best and it gets attached to the tree with one of those little koala bears that have arms that hug onto whatever you attach them to (bad description). Anyway, handmade ornaments are always the BEST and I'll take the popsicle stick star over a silver one any day:)
Monday, December 29, 2008 11:32:00 AM

Three Birds Inspired said…
I drag out the season all the way until Epiphany...complete with turning on the tree every day, Christmas music on the CD player and candles lit in my windows. Christmas music more than a week before Christmas Eve makes my head hurt. My neighborS had their tree on the curb on 12/26. Now THAT is just plain crazy!
Monday, December 29, 2008 3:00:00 PM

LoieJ said…
Fun to read about other people's holidays and see the similarities and differences. We will be having an ordination on 2/1/2009! Lots to do in a month. I was hoping to have a quilt done that I've been working on for years. I don't know how you get so many done. Good thing I finished the stole one year ago.
Monday, December 29, 2008 3:01:00 PM

Guenveur in Kent said…
I agree that the tacky mall Christmas music is very wearing. We have a groupd of friends over right before Christmas to spend an evening singing. This year we waited until the day after Christmas because John was in Germany until the week before. These are people who sing beautiful harmonies and we have dozens of carols which you won't hear on Muzak. Then there's the Boar's Head Feast in Cleveland the Saturday after Christmas which is a wonder of music and pageantry which is a magical way to keep it going.
Love your little angel.
Tuesday, December 30, 2008 6:13:00 PM