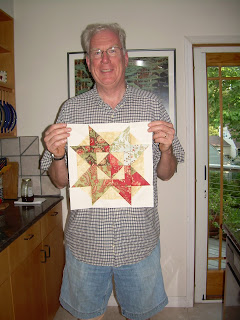 Hey, friends -- remember this guy?  The famous Husband Turned Design Wall who was pressed into service when there wasn't an inch (well twelve inches) of space on my wall to post this block that I wanted to show off?    He's had it relatively easy, lately, as far as having to hold up my projects.

And so he's found some new trouble to get into.

His late father's hobby was baking bread.  Not just any bread, but a rye that contained dill seeds, minced onion, molasses, and other delights.  It was absolutely scrumptious.  Pop used to send a loaf home with Tom when Tom was in college and later when he was a starving artist in Manhattan.  We all loved it.  "Grandpop's Bread" was what it was called.  At one point I persuaded Pop to share the recipe.  But I never did anything but file it in my recipe box.

At some point this past winter, during the most major blizzard, out of the blue, Joe got out the recipe and made his first batch. 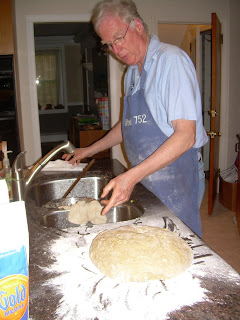 I love it.  We used to be Pepperidge Farm Whole Wheat types, but not any more.  Grandpop's Bread makes six -- count 'em -- six big yummy loaves at a time.  We had two loaf pans and went out and bought four more.  We're thinking of buying two more, in the interest of uniformity.

This bread is good toasted in the morning for breakfast, sliced for a sandwich at lunch, and to sop up gravy at dinner.  Six loaves at a time -- usually one or two go into the freezer and one or two get given away.  We took a loaf to Richmond; we took a loaf to Alexandria.

And, you know what, it's still called "Grandpop's Bread."  Just a different Grandpop makin' it.

My CityBoy is into canning.....we'll never run out of pickels......LOL

Sweet P said…
He looks very intent in making his bread. I think every man should have at least recipe that he's known for making. For my hubby it's grilled steak.
Monday, May 24, 2010 7:19:00 PM

Anonymous said…
One of my favorite memories of my dad was when we baked bread together. He had an old bread cookbook that he got from his grandmother, and we'd make all different shapes of rolls. I still love to bake bread, and I think of Dad every time I make rolls.
Monday, May 24, 2010 7:19:00 PM

altar ego said…
The molasses portion of this reminds me of what we used to call Swedish Rye, or "Limpa" when I was growing up. LOVED that bread. One bakery in town made it. Somewhere I think I found a recipe for it but have not yet followed through. I can almost smell those loaves from here!
Tuesday, May 25, 2010 9:29:00 AM

SallyB said…
Fresh baked bread....mmmmm, the smell of it is absolutely heavenly! And the taste is equally wonderful. This blog entry made me hungry just thinking about the joys of a good warm loaf of bread fresh from the oven! Mmmmmmm! Lucky you!

Word verification: barion, which is a real word that is a type of diamond cut, believe it or not! Want to read more about it? Go here: http://www.faceters.com/askjeff/answer14.shtml
Very appropriate, given that I am an April baby and my birthstone is a diamond!
Tuesday, May 25, 2010 7:15:00 PM

Guenveur in Kent said…
This reminds me of my mother's delicious oatmeal bread, which filled the house with the MOST wonderful aroma. Unfortunately, none of us got the reicpe, so it's only a lovely memory. I'd rather eat good bread than dessert.
Joe looks like a natural baker.
Wednesday, May 26, 2010 10:44:00 AM

Tanya said…
YUM! I would love some great bread right now!!! I had dreams of becoming a bread maker but I haven't ever had the courage yet. Grandpop's Bread has such a nice ring to it!
Saturday, May 29, 2010 7:40:00 PM