I haven't discussed any books here lately, and perhaps it is time to remedy that since I've done a boatload of reading lately.

Commencement was just terrible.  It's of The Group genre (remember how good that was?) and I could barely get through it.  It had received some good reviews in Bookmarks so I persisted.  Four vastly different young women, none of them credible in the least, meet on moving-in day at Smith College, become inseparable, and then reconoiter four years after graduation at the first of their weddings.  Not only were the women charicatures and ridiculous, the author didn't make Smith seem like a place I wish I'd sent my daughter to!  I just saw today in the Times that it is now available in paperback. 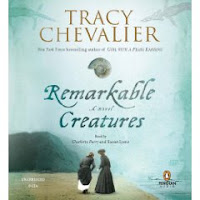 Having liked Girl with a Pearl Earring and loved Fallen Angels, I was happy to see Tracy had a new book out and I thought the cover of Remarkable Creatures was terrific.

The inside was less so.  A fictional account built on a real relationship between two female paleontologists who did their thing long before such activities were acceptable for women, the story was written well, but just wasn't very interesting or captivating.  Again, I stayed with it because I hoped for improvement.  Better than Commencement by far, but still way short of the earlier Chevalier books that I've read.

Katharine Weber's a new author to me, and I really liked this first book.  The last known survivor of the Triangle Waist Factory fire has died, and her granddaughter is accosted by a relentless investigative reporter who believes there is far more to the story than had ever been revealed.  She just might be right.  What's most interesting is the way the book is written -- you see, the granddaughter's man friend is a composer who writes his music based on elements of science, and this is evident in the refrains that meander through the story.

I liked Triangle enough to pick up Weber's newest book, True Confections, which I put right back down, lickety split.  Couldn't get past the second chapter.

On the nightstand presently are Galileo's Daughter and Gail Godwin's Unfinished Desires.  Neither has been opened as yet.

But that won't be the case for long

Pat said…
Funny you should mention Tracy Cevalier. I just finished The Girl and the Unicorn. Interesting, but it didn’t come up to the standards of The Girl with the Pearl Earring. If you haven’t read it yet, Water for Elephants, by Sarah Gruen, is quite good. It gives an interesting, and not so flattering, peek into a piece of American culture -- the old time traveling circus. I read it on the recommendation of my daughter, and really enjoyed the read
Monday, May 10, 2010 7:21:00 AM

Anonymous said…
I'm always interested in what others are reading. Have you read anything by Joshilyn Jackson? She's one of my favorite authors, and her fourth book (Backseat Saints) is coming out in a little over a month. I enjoyed the first three very much - gods in Alabama, The Girl Who Stopped Swimming, and Between, Georgia.
Monday, May 10, 2010 8:27:00 PM

wordmama said…
Our book club is reading The Next Thing on My List by Jill Smolinski. It had some interesting ideas about life lists that we will be discussing in club, but like you said, some of the characters are caricatures and disappointing. This is the second book I've read about a young unmarried woman who lives in California and can't seem to find any direction in her life. I don't remember having that problem when I was that age. In fact I'd go back to that time in a heartbeat! I read Water for Elephants, too, and it was excellent.

Guenveur in Kent said…
I loved "Galileo's Daugher" and I hope you like it, too. However, books, like other things are a mtatter of indiviual preferenc, as we all know. I liked "Remarkable Creatures," and found the people fascinating, especailly the girl with the amazing ability to find fossils, and how she ended up instructing academic paleontologists. It's not one of Chevalier's best but the woman can write.
I just finished "Gilead" ( I am notoriuosly behind the times whn it coms to best sellers) and found the protagonist a digressive bore. I got pretty tired of his endless Bible quoting and just wanted him to get to the point, whatever it might be (It's hard to be a good person and lvoe is the answer?). I kmow it was a favorite of lots of people, and I am an admirer of the writer but not this time. So thst's the thing about books - ya like some and ya don't like some. But I love to read, so I'll keep trying to find the ones I like......"The Lacuna" I loved."Prodigal Summer" I hated. Same author.
Tuesday, May 11, 2010 6:34:00 PM

Quayquilter said…
I found Girl with a Pearl Earring interesting for the research on time and place but a bit thin otherwise and don't intend to read any more by her. I prefer something meatier. I think the picture sold the book. I have had a print of it on my wall for decades and it fascinated my young children - draws you in with her clear calm gaze. What lies beneath?
Thursday, May 13, 2010 3:30:00 PM