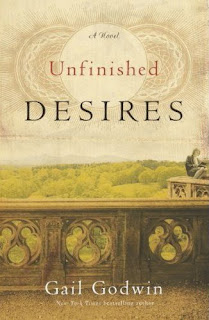 This book is one of the reasons the blog has been relatively quiet during the past week.  A review  of it caught my eye and I reserved it at the library; my number came up relatively quickly, and off to retrieve it I went.

That was the beginning of my downfall.  Not only blogging but quilting and domestic tasks went on hiatus.  Because I couldn't put it down.

Set mostly in the early 1950s, at a private Roman Catholic school for girls somewhere in North Carolina, the book is the story of many unfinished desires -- of the nuns, of the students, of the parents.  Godwin gets inside the self-focused and often cruel minds of adolescent girls better than anyone.  It's a story about teenagers written for adults.  We have glimpses of the nuns when they were students themselves, when they were teachers, and in the present, in their dotage.  Told from several viewpoints and in several times, it sounds as though it would be choppy, but it is actually practically seamless.

The ending is the weakest part, but that shouldn't stop anyone from hurring to the library to reserve this book.  If it is in paper by Christmastime, I could easily see buying it for gifts.

QuiltingFitzy said…
I'll reserve this one for sure! I'm making my way through Nancy E. Turner's work about life in the Arizona Territories (fiction). They're yummy too. Thanks for the recommendation.
Saturday, May 15, 2010 8:36:00 PM

Michele said…
So glad someone else loves to read. Congratulations on doing something so positive for your health. I need to emulate your actions. Beautiful grandbaby. Michele
Oh, and Nancy Turners books are dynamite....just some of my all time faves, that I reread from time to time.
Sunday, May 16, 2010 3:48:00 AM

Susan said…
I'm off to reserve this book also. Hope it's on audio since that is how I get most of my "reading" done these days. Makes all the time I spend in the car or doing household tasks like ironing go faster.
Sunday, May 16, 2010 10:11:00 PM