Paris in the Fall 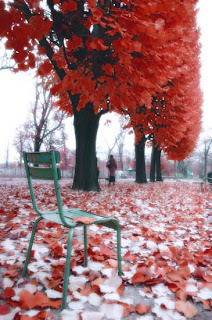 Well, well, what have we here?  A picture of Paris in the Fall, of course.  It looks inviting, doesn't it?

I'm tired tonight.  Had a dental appointment after work, and before that I had a trip to the Mailboxes place to send those little jackets off to their rightful owners.  Got home too late to cook (or so I said) and we went on down to the Pub for a salad supper.

Came home and started a third jacket, this time in size 3T, for Caroline, using some utterly scrumption\us periwinkle and aqua fabric that I bought yesterday.  Worked on it until I made a mistake; then I knew it was time to quit for the night.

So, Paris in the fall, eh?  A terrific picture, a lovely idea. 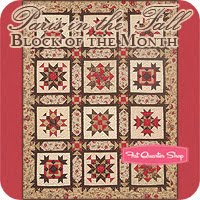 And what have we, here, she asked?  Why, it's Paris in the Fall again!  This spectacular BOM features French General fabric and is, obviously, sponsored by the Fat Quarter Shop.  They posted a picture of it on Facebook over the weekend and I hemmed and hawed around, thinking that another BOM was just what I need -- not!

Now who could argue with such logic, such wisdom, such profundity?

howdidIgethere said…
As Oscar Wilde said, "I can resist anything except temptation." Often, I concur.