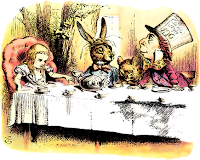 To my way of thinking, the current Tea Party movement makes the Mad Hatter's event look sane.  I haven't been able to organize my thoughts enough to write about it, though I've wanted to.  This morning I read an op-ed in The Washington Post that seems to say it all.  I thought it warranted wide readership; hence, I am reposting it below in its entirety.

When Tea Party wants to go back, where is it to?


As battle cries go, the Tea Party's "Take our country back" is a pretty good one. It's short and punchy, and it addresses a very widespread sense that the nation that Americans once lived in has changed, and not for the better.

When the Tea Partyers get around to identifying how America has changed and to whose benefit, however, they get it almost all wrong. In the worldview of the American right -- and the polling shows conclusively that that's who the Tea Party is -- the nation, misled by President Obama, has gone down the path to socialism. In fact, far from venturing down that road, we've been stuck on the road to hyper-capitalism for three decades now. The Tea Partyers are right to be wary of income redistribution, but if they had even the slightest openness to empiricism, they'd see that the redistribution of the past 30 years has all been upward -- radically upward. From 1950 through 1980, the share of all income in America going to the bottom 90 percent of Americans -- effectively, all but the rich -- increased from 64 percent to 65 percent, according to an analysis of tax data by economists Thomas Piketty and Emmanuel Saez. Because the nation's economy was growing handsomely, that means that the average income of Americans in the bottom 90 percent was growing, too -- from $17,719 in 1950 to $30,941 in 1980 -- a 75 percent increase in income in constant 2008 dollars.


In short, the economic life and prospects for Americans since the Reagan Revolution have grown dim, while the lives of the rich -- the super-rich in particular -- have never been brighter. The share of income accruing to America's wealthiest 1 percent rose from 9 percent in 1974 to a tidy 23.5 percent in 2007.


Looking at these numbers, it would be reasonable to infer that when the Tea Partyers say that they want to take the country back, they mean back to the period between 1950 and 1980, when the vast majority of Americans encountered more opportunity and security in their economic lives than they had before or since. Reasonable, but wrong. As the right sees it, America's woes are traceable to the New Deal order that Franklin Roosevelt, working in the shadow of the even more sinister Woodrow Wilson, imposed on an unsuspecting people.


In fact, the New Deal order produced the only three decades in American history -- the '50s, '60s and '70s -- when economic security and opportunity were widely shared. It was the only period in the American chronicle when unions were big and powerful enough to ensure that corporate revenue actually trickled down to workers. It marked the only time in American history when, courtesy originally of the GI Bill, the number of Americans going to college surged. It was the only time when taxes on the rich were really significantly higher than taxes on the rest of us. It was the only time that the minimum wage kept pace (almost) with the cost of living. And it was the only time when most Americans felt confident enough about their economic prospects, and those of their nation, to support the taxes that built the postwar American infrastructure.


Since the ascent of Ronald Reagan, though, America's claim to being a land of opportunity has become a sick joke. Unions have dwindled; colleges have become unaffordable; manufacturing has gone abroad; taxes on the rich have plummeted; our infrastructure has decayed.


But the country the right wants to return to isn't the America that the Greatest Generation built. Judging by the statements of many of the Republican and Tea Party-backed candidates on next Tuesday's ballots, it's the America that antedates the New Deal -- a land without Social Security, unions or the minimum wage. It's the land that the Greatest Generation gladly left behind whey they voted for and built the New Deal order. All of us should want our country back, but that country should be the more prosperous and economically egalitarian nation that flourished at the time when America was not only the world's greatest power, but also a beacon to the world.

Lori said…
It's possible to be a beacon if we'd quit apologizing for being the US! I know we'll never get as far extreme as some tea party people would like, but geez, get us out of the friggin hole we've started to dig for ourselves:)
'Nough said by me.
Love ya Nancy!!
Wednesday, October 27, 2010 10:27:00 AM

Jean Burke said…
Amen.....I can't wait until the election just so the campaign ads will stop. I wonder sometimes how policemen and policewomen keep their faith in humanity when, day after day, they see humans at their worst. I feel somewhat like them now....is there no civility left? Oy! It's very frustrating. Thanks very much for posting this...it eloquently states what I feel....piece.
Wednesday, October 27, 2010 10:31:00 AM

brite said…
Thanks for posting this excellent article. Here's hoping that 'bottom doesn't fall out' after the election.
Wednesday, October 27, 2010 11:36:00 AM

Vivian said…
The problem is that the masses look at "small picture" dollars not "big picture" trends. The only reason they now realize that they aren't better off is because the tanking economy no longer hides all that was being stolen from them all along!

Quiltdivajulie said…
Thanks for sharing this well-written piece ... there are just too many folks caught up in slogans and rhetoric without really thinking about the underlying (bigger picture) issues.

So many around here are angry and/or afraid and they need/want a target for that anger/fear. I'd hate to be a candidate in this climate.
Wednesday, October 27, 2010 4:09:00 PM

SallyB said…
Oh, but don't touch THEIR Social Security or THEIR Medicare! They huff and puff about encroaching "socialism" but what they fail to realize is that we already have it in a sense. Veterans get single payer health care through the VA, Medicare is a single payer system, Social Security allows retired and disabled people from falling into poverty and instead allows them to live in dignity. So as much as the Republicans have spent the past nearly 70 years trying to repeal the New Deal, do NOT touch their benefits, or they'll cry foul and find some finger to point. All they have to do is to look in the mirror. We have seen the enemy, and he is us.

Word verification: rewan, as in, we 'publicans wanna rewan the clock back to the past and git rid of them thar socialists what put in that thar New Deal thang.
Wednesday, October 27, 2010 5:57:00 PM

LoieJ said…
Sometimes I think that the there is a conspiracy of the rich against the rest of the people, to screw them economically. But then that implies that there was a plan, a long range plan, and it doesn't look like that to me. For example, a couple of companies send their factories overseas to save money on labor, thereby depriving a number of people of good jobs. They get some service jobs instead. The meat packing companies, which used to pay a really good wage,over $15/hour, now hire mostly immigrants (and have sometimes been busted for wholesale hiring of illegal immigrants) and pay them $8 and they better not complain. So this goes on for awhile and lots of companies follow the pattern like sheep. What is the end result? Lots of people trying to make a living in the service economy. They can't afford STUFF anymore, unless it is foreign junk, and they can't afford vacation trips anymore. So then even some of the service workers have their hours cut.

Laurie said…
Back in grad school in the late 80s I had to do a paper on the deficit from the Reagan-Bush I years. Best line I read: "The deficit exists because Americans want far more government than we're willing to pay for." Until that changes, our problems will mount.

LoieJ said…
Good article, Laurie. Let me clarify the intention of my comment. I didn't mean to say that the rich haven't tried to screw the rest of society, but that they might not have thought out the long range consequences of that action. I see what is happening as analogous to a community getting their treated drinking water from a small lake and sending their sewage way out of town. But then someone convinces the city government to save money on water/sewer by cutting the treatment of the sewage (outflow) and water (inflow), and saving processing costs by putting the sewage in the lake. This might work for awhile, but since the taxes went down, there are many more people moving into the community, so there is more sewage going into the lake and the problems eventually catch up with EVERYBODY. Of course, the rich guys buy bottled water, so what do thy care?
Thursday, October 28, 2010 11:22:00 AM