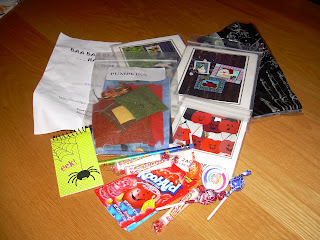 Well, friends, I wish I'd have written about my funk earlier.  Because no sooner had I done so than it began to lift!  And now I'm no longer At Odds.

The so-so book actually provided excellent discussion at the book club and I never did finish it.  And the book for next month sounds really good.  I lost a pound and a quarter in spite of having neglected The Program for quite some time.

It's still dark in the morning, too dark to go out and walk, but Himself helped me to clear off the stuff that had accumulated on the treadmill and the past two mornings I've climbed right out of bed and walked for twenty minutes.  At a brisk pace.  I've entertained some ideas about projects for White Oak, and have gone so far as to pin a couple of Itsy Bitsy's rows together.  I decided I could watch the Giants.

I took two tops to a new machine quilter the other night.  One is the brown and aqua stars quilt and the other is my version of the Mocha Trails pattern.  The first one is going to go with me to Tom and Anastasia's; they need a gift for some special friends.  The second one -- well -- I've just never liked it very much.  I loved the pattern when I bought it.  And I enjoyed making it.  But I used mostly fabric that someone gave me in exchange for something else and it just isn't to my taste.  It's been sitting around in flimsy stage for too long.  So I'm getting it quilted and going to bind it and then I'm giving it to a committee at church who is planning a mission trip to Central America.  They'll auction or raffle it for a fund raiser.

It was funny.  Once I posted about being At Odds, I noticed that several other bloggers were in the same condition.  Knowing that helped -- made me feel less singled out, if you know what I mean.  The other thing that helped a lot was being picked as a winner in Kim's recent giveaway.  She'd offered a pattern and a little kit; I got to choose which little kit and the pattern is for all three!  Would you look at what she sent, though!  There are two more patterns, a bunch of instructions, a hilarious little notebook and all those other goodies.  If that wasn't enough to turn Odds into Evens, I don't know what would!

howdidIgethere said…
The sunshine, blue sky and wonderful weather have helped me out of my feeling "at loose ends". So did the crazy experience of attending the Rally in DC yesterday and, for a few minutes, seeing my daughter.

Some basement organizing, laundry and SEWING are on the menu for today!

Kim said…
Glad to see I was able to help cheer your world a bit! LOL! I think Mrs. Goodneedle doesn't realize the Kool-Aid is for dyeing wool, but of course you can drink it if you'd prefer. And, by the way, the Giants didn't do too bad either, did they?
Wednesday, November 03, 2010 11:44:00 PM