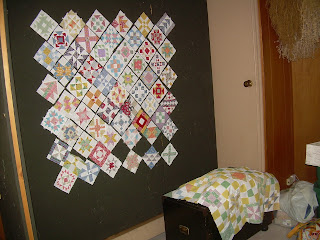 When Joe was getting ready to move his office into our lower level (and things on that front are just fine, thank you), I realized that it really was time to prune and purge the sewing studio.  I was, for me, ruthless.  A massive trove of scraps.  Fabric that fell into the "what was I thinking" category.  Orphan blocks.  Partially completed projects that I didn't like enough to ever finish.  Turbo, ever obliging, came over and took every bit of it.  I took an inventory of what remained and vowed that I would finish [an unspecified number] WISPs before I would buy any fabric for new projects.  If I had to buy fabric to finish something, that was okay.  And, of course, I could start something new, if I had to, from fabric I already own.  Now prolly y'all realize by now that discipline isn't one of my top gifts.  But I've done really well.  For an entire month!
A group project called for me to make some pinwheel blocks out of Thirties on WOW.  I knew I had a box with some 30s FQs in it and when I pulled it down, I was right.  There were a few FQs.  And a vast amount of scraps.  There were also 24 6" blocks that when I put them up on the wall, they were one block short of a top (no wise remarks about the writer here, please).  So after I made my pinwheels, I made that 25th block and set them into rows.  There was a generous sized piece of green floral thirties which will be the border.  Later today.  You can see the borderless project casually draped over the black chest in the foreground.
The real find, however, was a bazillion 4.5" blocks.  Several years ago, Sistah Jan and I determined to make identical twin blocks at a rate of so many per month and exchange.  If I were better at math and more interested, I'd count up the blocks and figure out how long this went on.  Up on the wall they went and lo!  They are three 4.5" blocks short of the center of a top!  And they are -- as someone would say -- stinkin' cute!  So cute I just can't stand it. I've cut what I need for one of the three vacancies and have picked out the blocks for the others.  I know exactly how I want to finish this; it will require a trip to the LQS to purchase some additional WOW and I'll put my blinders on when I enter the store.  I promise.
I've been incredulous when I've read on some people's blogs that they found things they didn't remember they had.  "Impossible!" I scoffed.  Eating my words (well, that word anyway).
Oh, and BTW, there were some 12" 30s/WOWs in there, too.  Didn't remember them at all!

wordmama said…
A friend of mine decided to finish a quilt challenge, I guess, that we started years ago. We were both making the same quilt. Back then she finished the applique and part of the pieced blocks. I was intimidated by the applique then, but now I could whip it out in a flash. But I don't know where the pattern is. Fortunately she does.

But when I was fishing out my collection of fabs for this project, I found a complete set of blocks for a top ready to put together. I had the strips for the sashing cut out too. Now it only needs assembling and a border. Sweet!
Saturday, October 02, 2010 5:52:00 PM

AnnieO said…
How absolutely LOVELY to find blocks making nearly finished tops--amazing what goes out of your head when you're not thinking about it! I don't know what a WOW is tho...clue me in?
Saturday, October 02, 2010 6:55:00 PM

A hidden treasure! That is going to be one fabulous quilt.

suz said…
I completely understand this. I moved at the beginning of August after 22 years. What a shock. I gave a way a ton of fabric and UFOs, threw away a lot of really horrible fabric...and there is still way too much. I'm trying to cut back as well.
Monday, October 04, 2010 10:27:00 AM