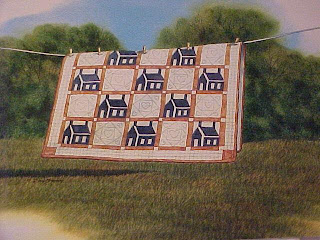 Don't you just love this painting of a School Quilt?  I downloaded it from the internet and have a fantasy of one day making one.  From hand-dyed fabrics, I think.  Because spending my days in a school is such a joy.

At the school where I work, each year we have a Quaker-values based theme for the year.  This year's theme is "Telling Our Stories."  The idea is to learn more about each member of the community.

Yesterday three members of Sandy's second grade class came to interview me, to help me to tell my story.  They asked, "What do you like best about your job?"

I told them there were two things.  The first was being around terrific kids all of the time.  The second one would be more difficult for them to understand:  In a school, there are annual celebrations to look forward to:  The Hallowe'en Parade out front on the circle with all of the lower school kids dressed in costumes they have made (I'm particularly partial to the owls), the Winterfest celebration where we recognize all of the cultural and religious holidays at the end of December, Chinese New Year where the huge paper dragon snakes its way through the halls to the beat of a drum, Moving Up Day where lower school kids move to middle school and Moving On Day where the middle schoolers become upper schoolers, and, of course, Baccalaureate and Commencement, honors assemblies, Martin Luther King Day of Service, and all of the lesser festivals.  Watching as yet another wonderful play is produced, another group of kids become chamber singers, another class of pre-K students release butterflies.  Annual milestones.  Each to be anticipated and enjoyed.  A constant reminder that Life Goes On.  That is the rhythm of working in a school.

The lobby outside my office is full of pumpkins and apples for sale.  There's some straw there, adding to the ambiance, and nobody minds if it gets tracked around a bit.  This morning I went nextdoor to the school library where the book fair is going on, along with a bake sale to benefit an upper school activity.  I bought two books and two cookies.  This afternoon I attended an annual assembly, a special concert which each year memorializes an alumna who died too young.  Tomorrow there is a tea party to honor a librarian who unexpectedly needed to retire earlier than planned.

And I get paid for this.

Micki said…
I have always loved house quilts..I hope you make it one day! I used to love the book fairs at the schools where I taught¬
Micki
Thursday, October 14, 2010 2:34:00 PM

StitchinByTheLake said…
That's exactly how I felt about school. :) I had to retire earlier than I wanted and though retirement has been wonderful there are many days when I miss it. blessings, marlene
Thursday, October 14, 2010 2:49:00 PM

Pat said…
Your Mother Hen gene is more developed than most, as is your Giving Heart and Joyful Spirit. Of course rumor has it that you are somewhat lacking in the Graceful Moves department, but life is full of compromises. Just sayin'.
Thursday, October 14, 2010 4:16:00 PM

altar ego said…
You are lucky, indeed. I can hear the echo of voices in hallways and the beat of footsteps outside your door. Makes me want to be where you are. Enjoy.
Friday, October 15, 2010 12:16:00 AM

quiltmom anna said…
I so can relate to your school experiences- The school year is marked by the special days and events.
I have wanted to make a school house quilt for a long time too- somehow it moves to the bottom of the list of quilts to make. Maybe someday...
I love the book fair- right now we have a large Halloween basket to raise money for the United way- there will be other fund raisers to raise money for school activities. The kids are the best part of my job- they make me laugh daily.
Regards,
Anna
Friday, October 15, 2010 1:26:00 AM

suz said…
I am so jealous. If I move to Near Philadelphia, can I get a job there? I'll sweep floors!
Your school sounds so wonderful. I decided against teaching because I couldn't find schools like yours. I suspect your school produces amazing human beings!
Tuesday, October 19, 2010 1:53:00 PM