Has Anyone Made This Quilt? 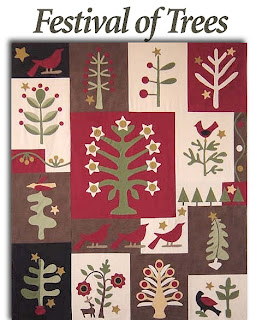 I bought this project as a BOM a few years ago and am finally getting it finished.  I'm actually hand buttonholing the very last block and it occurs to me that it is in the realm of possibility that this project could be finished by this Christmas.  Except for one little snag.

Here's my problem:  The last installment of the BOM that I received is missing the last page of the instructions for assembly of the top.  While it looks pretty straightforward, I'm concerned about that one little star block that is going to require partial seams.

I phoned the shop that I thought I had bought the BOM from and apparently I was mistaken.  They said they had never carried it.  They suggested I email Barbara Brackman, the designer, and I thought that was a good idea.  But Barbara never answered my email.

So, friends, if anyone out there has made this BOM and still has the instructions and would be willing to share that last page with me, I'd be so appreciative.

Nanci said…
That is a beautiful quilt and can't wait to see it finished. It looks like Homespun Hearth still carries this so perhaps if you called them and explained they would copy that one page for you. Good Luck.
http://www.homespunhearth.com/detail.asp?product_id=ZM-FT100
Tuesday, October 12, 2010 9:47:00 PM

*karendianne. said…
Really pretty but you know I'm just basically spamming you here as we both know I don't have this.
Wednesday, October 13, 2010 7:55:00 AM

Salem Stitcher said…
If I can remember when I get home, I think I can find the pattern and can send you the missing page. You're right, the little star involves a partial seam.
Thursday, October 14, 2010 2:19:00 PM

Quiltgranny said…
Karla Menaugh also worked with Barbara Brackman on this. You could contact her through her blog:http://karlamenaugh.blogspot.com/ I think she might help if you explain what's happened. I mean, after all, she's a KS girl!
Saturday, October 16, 2010 8:30:00 PM

Nancy said…
OMGosh...that is one beautiful quilt. I don't have that last page but would be willing to do another trade for the pattern when you are done.... I still have some of those beautiful Civil War fabrics....hint hint...
Monday, October 18, 2010 10:43:00 PM