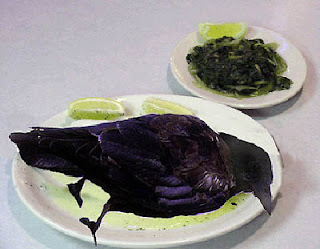 I had a post that went up earlier today that was somewhat critical of people who are all making the same quilt.  I suggested that perhaps there were some bloggers who were on the payroll of a certain fabric company or a certain designer.  I named names.

I went too far.

I received a lot of comments in short order, some of which were supportive of my position, a couple who dared to disagree and one quite righteous individual who slammed me for slamming others after proclaiming, "I would never do that."

Then I heard from a blog friend who set me straight on one count, anyway.  I'd speculated about a particular designer's marketing plan.  My friend firmly but not unkindly explained my error.  I reread my post.

I'd gone too far.

Thanks, friend, for being forthright.  You know who you are.

*Eating crow (archaically, eating boiled crow) is an English-language idiom meaning humiliation by admitting wrongness or having been proved wrong after taking a strong position.[1] Eating crow is presumably foul-tasting in the same way that being proved wrong might be emotionally hard to swallow.[1]  [Lifted directly from Wikipedia]
Email Post

Miss Jean said…
This has been a lesson for me as well, Nancy. In our every day life when we say things we regret, were it as easy as to delete what we said in haste as it is to delete a post. This will give me pause when I speak to think first. For this lesson, I thank you.
Wednesday, March 23, 2011 2:19:00 PM

floribunda said…
maybe not on the payroll of designers, exactly, but certainly on the "gift list" of them!

I think it's interesting to see several people's interpretations of a particular quilt pattern, but the joy is in seeing the variety of colors, fabrics, and finishing that each uses. If I want to see a bunch of quilts all the same I can go to Macy's...
Wednesday, March 23, 2011 2:30:00 PM

Pat said…
I think I might have some recipes for crow, having eaten my share from time to time. You sure got us going, though! Gave me some pause for thought, m'dear, which is exactly what you do so well. Wouldn't it be loverly if we could all just sit around some big ol' quilting frame and solve the problems of the world face-to-face?
Wednesday, March 23, 2011 3:04:00 PM

Anonymous said…
I just came across your blog as I believe I just read the pulled post by the other individual you refer to thanks to the wonders of Google Reader. I think THAT person went too far too, I have to say, so you are not the only one who might be needing a crow recipe. There are a few bitter and jealous bloggers out there in blogland, me thinks.
Wednesday, March 23, 2011 3:59:00 PM

Patty Nordahl said…
When I've (so many times) opened my mouth without the brain filter on. I just wish for chocolate shoes.
Wednesday, March 23, 2011 4:04:00 PM

Belva said…
Snap! I missed all the comments. I read the post earlier and there were only one or two comments then. I'm so curious now to read what others had to say. I just love to hear both sides of a controversy. Some can be so eloquent on both sides, but then some can be total knuckleheads too. Thanks for keeping it real.
Wednesday, March 23, 2011 4:43:00 PM

Stitched With Prayer said…
Hi Nancy...I just stopped by to say I didn't read your earlier post, I read a wonderful post on Carrie Nelson's blog concerning your post though...if you haven't read it, please do. But I digress, I do that often. I really just stopped by to say "HEY...everyone has to vent once in a while...EVERYONE". Hang in there and ummm...if your really gonna eat that crow, pluck it first, I always choke on the pin feathers!!! Hugs....
Wednesday, March 23, 2011 6:46:00 PM

kansaswx said…
Dang. I want to read the post after reading Carrie's response. Put it back up! Why be afraid of controversy?
Wednesday, March 23, 2011 8:28:00 PM

dianne said…
i THINK that i read the post (did it have a link to Piecemeal something or other about the dumbing down of quilting?) ... i'm not sure, though - cuz i don't remember that you named names ... i sorta kinda agreed and sorta kinda disagreed with you (and with the blogger on the link) ... but i USUALLY sorta agree or sorta disagree with you - we (you and i) have very different perspectives on things - if all of us had the same thoughts and feelings, it would be too doggone boring, wouldn't it?

the MAIN reason i visit here is to gaze upon your QUILTS ... and to read what someone who is all the way across the country from me is thinking about the world ... and now i'm gonna have to go check out Patty Nordalh - i LOVE the idea of chocolate shoes...
Wednesday, March 23, 2011 9:18:00 PM

Yuki said…
Ok, I know I am in the minority but I liked your post. Everybody is entitled to an opinion and if they don't like it, it's ok. If we all had the same opinions, we would get boring very fast.

I sew regularly with a group of ladies. We usually work on our own projects. Once in a while, we will do a group quilt for someone.

At the beginning of the year, I gave them all a quilt pattern and said, let's see what you come up with at the end of the year. So we are all basically making the same quilt. It will be fun and interesting to see how they do.

Kim said…
I wish someone in the quilting world would put me on their payroll or at least send me free stuff, darn it! LOL! You know, I think, that we all have our own comfort levels, tastes, and abilities, so we do all kinds of stuff when it comes to quilting, and there's no real "wrong." I love my Thimbleberries group but I always wondered why everyone would want to make the very same quilt each year so I've always put a "spin" on mine and I see that as a little challenge to myself, but others really like their quilts to look exactly like the original--and you know what? To each his own. I didn't read your original post that you've withdrawn, but this one is pretty classy, I think. But then that's exactly what I've come to expect from you!
Thursday, March 24, 2011 2:48:00 AM