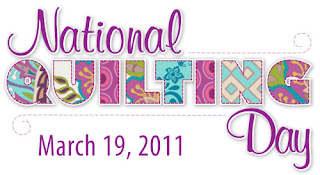 So, today is National Quilting Day and I have observed and celebrated in many and various ways.

Started the day bright and early, picking Pat up at 8:15 for a run out to Sauders to get more white for Justin's quilt.  The one-hour trip in each direction flew by, thanks to Pat's conversation and, as she pointed out later on, we solved more than a few of the world's problems en route.  I was happy that there was still a little bit of the white that I needed and I bought all that was on the bolt:  1-2/3 yards, the cutting lady said.

I really wasn't going to buy anything else other that some popcorn from the bulk foods area, but last night, just before going to bed, I happened by Piecemeal's blog and read her most excellent rant and wandered off to the website that she suggested and got captivated by something I found there that called for a jellyroll or two and I said to Pat on the way out that it was a good thing that Sauders didn't carry jellyrolls, now, wasn't it?

Hah!  They had precisely seven.  And one was a French General.  Sheesh.  I'm blaming Piecemeal, wouldn't you? 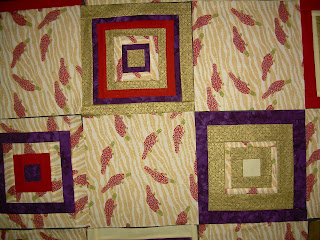 Anyway, I spent a couple of hours later in the day between laundry loads working on the platypuses, a UFO that's been loitering around for about seven years or so.  I've got 29 of the pieced blocks in progress and 28 of the solid squares cut and can't for the life of me figure out precisely what the dimensions were for the layout that I had in mind.  Any insights on this would be much appreciated.   I'll prolly spend another hour piecing platypuses (yes, I really want to call them platypi, too, but if you Google platypus plural there are a whole lot of questions about this and one source strongly forbids tacking a Latin ending onto a Greek stem) and hope that some plan evolves.

After my afternoon nap (only thirty minutes, but felt so luxurious), I read Jennifer Chiaverini's An Elm Creek Quilts Collection that someone had given me for Christmas.  When I finish, I intend to pass it along, so do stay tuned.

Finally, we've a house guest coming sometime later tonight, and while I wait for her arrival, I'll continue hand quilting on Rainbow Dots.  A truly satisfying National Quilting Day for me!  How about you?

Unknown said…
I've postponed National Quilting Day until tomorrow as I've spent most of today watching rugby - I shall crack on with lots of stitching tomorrow to make up for it :)
Saturday, March 19, 2011 7:25:00 PM

Anonymous said…
I took a class at a local quilt shop and made 3 items - a cute pin cushion (never can have too many), a bag to hold junk (scissors, rulers, etc.) and a cute case for needles that looks like a "letter" when it is finished. Your CA cuz
Saturday, March 19, 2011 9:06:00 PM

floribunda said…
I celebrated by taking the Pfaff in for service... oh joy! It had jammed on something and I wrench it free, but then the timing was completely off and it started skipping 4 out of 5 stitches. Sounds like you had a more productive day -- love those platypuses!
Saturday, March 19, 2011 9:59:00 PM

Anonymous said…
I'm glad you like Karrie's pattern - the quilts she made from it are even more gorgeous in person. Random Reflections is such a flexible pattern, it works with any fabric line. I'm looking forward to seeing your version with French General fabrics. I'll happily take the blame!
Saturday, March 19, 2011 10:54:00 PM

altar ego said…
Dang it, Nancy, thanks to being directed over to piecemeal I now have another blog on my blogroll! Heh, heh. I've got more projects downloaded from Moda bakeshop than I have time in my life to contemplate (well, not really, but you know...), and now even MORE inspiration is wafting its way my direction. All because of you! I wouldn't have it any other way. Except to getting around to getting at least one of these projects underway. At least the sewing machine is seeing the light of day, so there's hope.
Sunday, March 20, 2011 10:06:00 AM

Salem Stitcher said…
Sounds like a most fabulous National Quilting Day to me. Mine was fairly quilty as well. Travel to Asheboro for the NC Quilt Symposium Board meeting. Arrive back home in time to meet the Striving Spirits to give the Djembe Quilts to the rightful owners. Come home and work on a new pattern, which after a few more hours tonight is ready to baste and quilt. It's been a VERY productive weekend!
Sunday, March 20, 2011 11:38:00 PM