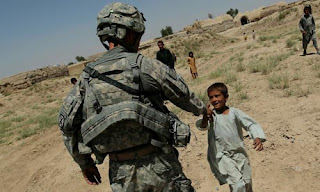 I've written about my women's Circle from church before; and now I'm writing about something we're really happy about.  A few years back, Pat's son was in the Army and was stationed in Iraq.  He wrote home about things that he and his friends needed, and the Circle responded.  We sent him monthly care packages of things he missed; one month it was peanut butter and marshmallow fluff.  Eventually he came home, was discharged, and actually entered culinary school!

In January, Rosita fondly remembered our having done this and wondered if there might be a way we could "adopt" a soldier in Iraq or Afghanistan and send packages.  Nobody present that evening knew of anybody stationed over there.  But I knew that one of my seminary classmates had become an Army chaplain and had done at least two tours of duty in Iraq.  I thought he might be of help.

This week we heard from him.  He provided the name and address of an officer he knew.  This Major is in charge of a group of 20 soldiers and was delighted to hear that we wanted to adopt them!  So we'll be sending monthly packages to her to share with her unit in Afghanistan.  I'm sending the first one and then we'll take turns.  She's looking for lotion, hand sanitizer, candy, magazines, home-baked treats and something to hang on the walls!  How wonderful is that?

This picture isn't of one of our soldiers.  At least not that I know of.  I downloaded it from the internet.  But it  could be!  Deborah Circle is so happy to have the opportunity to let a group of our soldiers know we are thinking of them and are so appreciative of what they are doing for us.

Anonymous said…
My church group supports a platoon that one of our member's sons is a part of. We also make helmet liners for anyone that we hear needs them. If your group can use them Nancy please e-mail where to send them. Love you. Your CA cuz
Saturday, March 05, 2011 9:41:00 PM

Pamela Kieffer said…
This is a most wonderful job.
At one time we had a place in Iraq where I sent school supplies. The fellow came home and did not leave an address so we could not continue.
Saturday, March 05, 2011 10:28:00 PM