A Weekend in Richmond 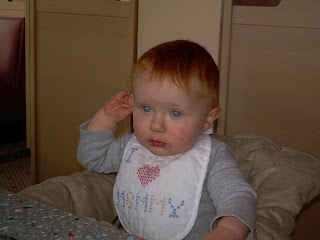 Tom and Anastasia asked if we would come down for the weekend to take care of Nate.  Each of them had a good gig that would take up much of the weekend and they thought it would be best if Nate had consistent care rather than a series of sitters.

We had a wonderful time with this marvelous fellow.  He's still got that winning smile, though you wouldn't know it from this photo.  He's highly mobile, getting around at high speed with a peculiar half-crawl where he uses two hands and one knee and sort of drags the other leg along.  Kind of resembles the way a crab walks, sort of sideways. 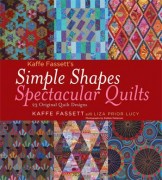 We had time at one point to go up to Quilting Adventures, the shop I like so much, even though I didn't have any specific needs at the moment.  Not even thread.  I saw the new Kaffe and Liza book that I'd heard so much about and began to leaf through it and before I knew it I'd seen a quilt that I knew I needed to make and went over to start picking out FQs of batiks to make it happen.  Don't know when I'll get to it; there are other things in the queue.  But I know the recipient.

The book is gorgeous.

After the fabric shop, Joe wanted to go to the chocolate store.  We got to Carytown and I told him I had no business going into a chocolate store, so he parked and I wandered into a very attractive shop that had wonderful clothes.  I ended up buying a dress that I liked a lot and not only because it was one size smaller than I have been wearing!

Pat said…
Nate's not a baby anymore! What a cutie. Maddy does that same goofy crawl; looks odd as all get out, but she can certainly travel fast doing it. I'm so glad you had a good time, found a pattern & fabric, and a dress in a smaller size. Sounds like a very successful trip!
Tuesday, March 29, 2011 9:55:00 AM

Teresa said…
My daughter crawled that way. I thought there was something wrong with her and had the doctor check it out - he said not to worry, she was just a little lazy to get up on all fours. Guess he was right, she went on to play varsity softball and march in the band.
Tuesday, March 29, 2011 11:59:00 AM

Guenveur in Kent said…
That baby is just beautiful, as are all your grandchildren. They all have the most exquisite coloring.
Tuesday, March 29, 2011 6:08:00 PM

Mrs. Goodneedle said…
Clothes shopping, chocolate and a new quilt book... plus, keeping a baby; you have just described the PERFECT weekend! Nate is growing up at the speed of light right before our eyes; and speaking of eyes... his are gorgeous!
Wednesday, March 30, 2011 7:27:00 AM