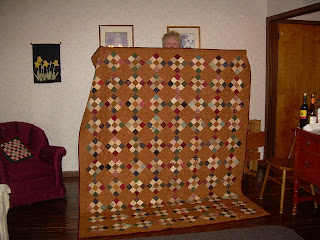 It doesn't get much better than this weekend, despite losing an hour.  Honna and I started out around two o'clock and ran into Marsha and Pat at Sauder's at three.  After supporting the economy of Muddy Creek, the two of us went to White Oak for a wee little nap before the rest of the entourage arrived.

Pat didn't make this Autumnal Splendor quilt this weekend, but for some reason she had it along and I thought we should have a picture of it.  Pat spent a lot of the weekend working with miniscule CW HSTs and prolly will be calling the Guide Dog Foundation tomorrow. 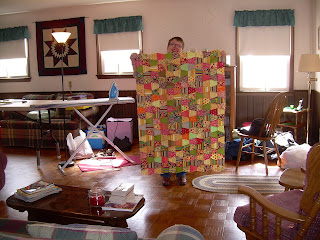 She had very generously brought along her new Accu-Cut Go! cutter and after a quick demonstration allowed us to play with it at will.  Judy and Bobbi were particularly taken with the tumbler dye, and each cut enough for a small quilt.  Bobbi got really focused on hers and is just about ready to donate it to the upcoming auction at her church.

Judy's is in soft pastels and will be a baby quilt.  She didn't get as far as Bobbi did because she had other things she was trying to get done. 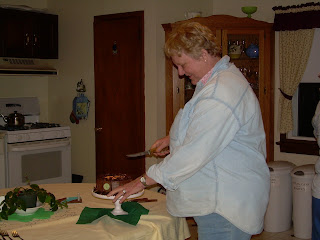 All of our meals for the weekend except one are included in the cost of the getaway.  Saturday night we went out to Isaac's as a group and had some delicious fare, but it wasn't as good as what Carol had been cooking for us.

The Executive Committee had learned that Pat has a birthday this week and surprised her with a cake and a rendition of Happy Birthday To You, each in her own key, of course. 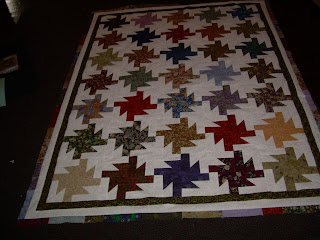 Marsha spent a lot of her time hanging out with William Morris.  The two of them were tessellating for simply hours.  And the result was gorgeous.  Unbelievably, she's going to give this beauty away!  And not to me!

This picture was taken before the final wider white border was applied. 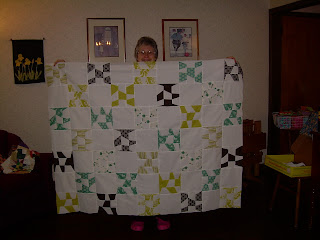 I made a couple of blocks for a group project and also did a pair for the Guild's monthly lotto, learning a new block for each of these endeavors.  Most of my time, however, was spent on this quilt, a wedding gift for my friend Kathy's son Justin and his bride.  I'd had one idea for his quilt and then dreamed about a second idea, and finally made a third.

This is Emily Cier's Irish Chain, which I've been wanting to make ever since I spied it.  The blocks were supposed to finish at 8"; mine were a bit wonky and scraggly and I trimmed them to 7-1/2".  So the quilt is a little smaller than Emily's design.  Not to worry, when I ordered the fabric I planned a border and ordered enough for that.  Planning to get it on early this week.

We had a wonderful time.  Probably one of the best ever.

Irene Onderweegs said…
You know, G'd sends us Dreams to live our lives! I always told the kids to follow their dream, as that will make them happy. Not working hard on the money, but working hours to fulfill a Dream. Martin Luther King did, Nelson Mandela did, so many others did. Those Dreams make our world a better place in the end. Other dreams make nightmares happen... Keep dreaming, have peace of mind. And make that gorgious quilt you want for yourself. Share its twin sister with the ones you love ;^}
(you just made my day! these kind of early morning reads do make me happy!)
Love from Amsterdam, Irene
Monday, March 14, 2011 4:35:00 AM

Evelyn aka Starfishy said…
Looks like you all had a wonderful time and what pretty quilts! I got a kick out of the big tumber quilt - that Go Cutter must be something! Cheers! Evelyn
Tuesday, March 15, 2011 12:10:00 AM

Especially the part about you and Pat and chocolate cake and sewing. I'm gonna package myself up and mail myself over there next time. I swan. I really do.
Tuesday, March 15, 2011 1:56:00 AM