Long-Term Projects and an Amazing Hat 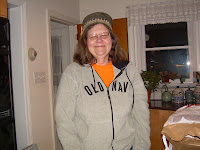 The monthly hand-sewing group met the other night.  Helen, who last month had appeared in her Professor McGonagall hat along with a fetching black cape, graced us with her Dumbledore hat.  She was working on hand-piecing nine-patch blocks and sat next to Marsha, who knat (no photo available).  Judy didn't have any hand-sewing but came anyway.  Bonnie and Turbo had called in sick. 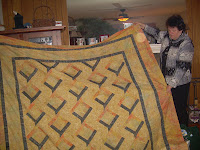 Honna has miraculously turned The Quilt From Hell into a flimsy!  This project has been plaguing her (and us) for longer than anyone cares to remember.  It was a case of her having impulsively said to a family member, "Pick out a pattern and some fabric, and I'll make you a quilt!" without providing any parameters.  No one liked the fabric they chose and the pattern was more difficult that Honna'd imagined and Marsha had to bail her out for part of it.  Honna learned a bit about limit setting. 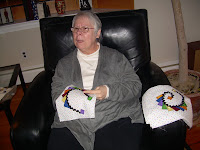 Emily has been working on these cute little things for almost as long as we've known her; she says that the end still is not in sight.  But she presses on.  I continued hand-quilting Mason-Dixon which has been in progress for a couple of years now; I stitch on it when I have no other handwork available.  At this point I'm on the penultimate border, about twenty or thirty minutes from turning the corner onto the home stretch.  So I'm thinking it will be finished this year!

Pat said…
I love Helen! Honna's quilt is especially wonderful, considering all that she has gone through with it. The dark framing is what really makes it come alive instead of just sitting there like a dead fish (we know you didn't choose the fabric, Honna). Emily's blocks are so bright and whimsical, and I am sure M-D will lovely once complete. I am so much in awe of your hand quilting it. I get Just Say Nein back from the quilter today & will be bringing it to WO to hand stitch binding.

altar ego said…
I think you all have it right: the way to tackle the tough stuff is to be in good company who can cajole, challenge, comfort, and otherwise make the time passable while working on those perpetual projects. Wish I lived nearby!
Wednesday, March 02, 2011 10:52:00 AM

Guenveur in Kent said…
Actually, I think Honna's quilt looks right nice: suble colors,politr pattern (unobtrusive, would go with any style of decor). I reckon she's sick of it, but I beleive it is quite handsome. All in all the evening sounds like a bunch of people stuck with tiresome projects, but I'll bet it was fun anyway. And the hat is fine, too.
Wednesday, March 02, 2011 2:26:00 PM

Salem Stitcher said…
I've often thought about starting a group that gets together once a month to work on those "forever" projects. Eventually, the project will get done and in the mean time, we're in good company. Sounds like you have such a group (whether you meant to do so or not)!
Wednesday, March 02, 2011 5:06:00 PM

Anonymous said…
I am in awe of Honna's quilt too, after watching her struggling with it. Came out lovely and is a reminder to me, to persevere! Bobbi
Wednesday, March 02, 2011 5:45:00 PM