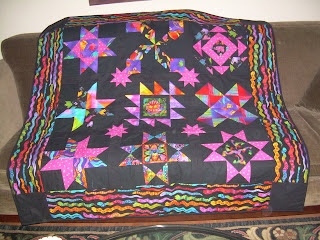 Jaime and Dennis, who married last February are expecting a little one in June. They don't know the gender; like Sherry and Chris, they prefer to be surprised. I must say that I approve!

There's a baby shower for this little one tomorrow afternoon, and I'm unable to attend because of a commitment with Joe, Andrew and Amy. I waited too long to get an outside picture of the gift for Jaime's baby and now today it is rainy. So I spread the quilt on the loveseat to get a photo. It isn't ideal, but it will do. It is made with Laurel Burch Jungle Songs fabrics; the nine blocks were the partial result of a swap we had about five years ago. I had used some of the blocks to make a little quilt for Sam last spring and there are still enough for one more baby quilt. 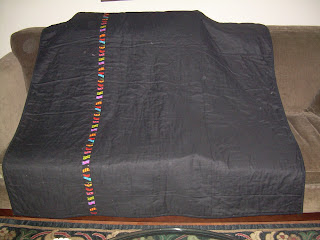 I did a dumb thing when I was sandwiching it. You may remember that life has been a bit hectic around here for the past several weeks. I've been distracted as well as overcommitted (though that is starting to settle down some). When I made the sandwich for Jaime's baby's quilt, I wasn't thinking, and lay the back down wrong side out instead of in. Didn't discover this until I had the binding all machined on! Did not want that seam showing on the back, so I cut a 1.5 inch strip of the snakes fabric and folded the edges in and hand stitched in in place over the seam. Sherry is confident that people will think it is just a wonderful little detail I chose to add, and have no idea that it is covering up a mistake. I hope she's right!
Email Post
Labels: Baby Quilts

Anonymous said…
I was just thinking that striped strip was a clever way to add interest to the back. Who knew???
Very fun quilt for a baby.

Diana said…
I was wondering if the stripe was ribbon or a strip of fabric, thinking that it was a cool way of breaking up the black on the back. Nice way to turn lemons into lemonade, lol!
Saturday, March 08, 2008 11:41:00 AM

Sewbaby said…
I love the quilt and the little stip on back is great!Great colors!

The Naturalist's Daughter said…
The quilt looks fantastic! I love that snake fabric. The strip on the back is a neat idea. Just gorgeous.
Saturday, March 08, 2008 9:33:00 PM

Pam said…
Great thinking on covering up that seam! whoo hoo saved by the snakes!

Anonymous said…
I've been known to oooppps it on occasion (frequently). This usually brings out creativity in finding ways to save the project. Now why can't we call on that same creativity on demand not just when we've messed up? The quilt is very cute and I think you made a good recovery...adds color to the back;0)
Monday, March 10, 2008 8:12:00 PM

*karendianne. said…
You know, I keep coming back to this to peek. Its so neat and inspiring and makes me contemplate how cool YOU are for making it.

This is definitely a quilt Karen would make.

I dig it. And the uniqueness of the back story.