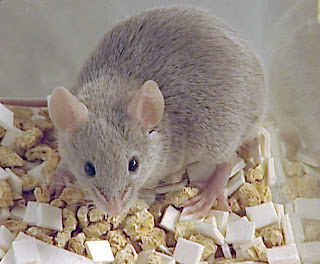 It's been a bad day in a bad week Near Philadelphia, partly but not entirely due to a relative of the guy pictured to the left. It started on Monday when I came in to find the cork top on the glass jar of animal crackers that I keep on my desk chewed up. There were bits of cork all over that corner of the desk and in the jar. There were bits of other stuff on the desk too (eeewwwww!).
Monday was the day I discovered that most of my incoming email was going straight into the spam folder rather than my inbox. I contacted Comcast and was told, "Click on the 'this is not spam' button for each email." Sheesh: I knew that. Clicking moved that email into my inbox. So I have been doing that for each email. All week.
Tuesday was the day I discovered that any email I send out from my Comcast account shows itself as "Sent" but it is never "Received" by anyone. Apparently this had been the case since sometime on Sunday evening. I hoped it would be better by morning. Tuesday was also the day Joe came home late for a nice dinner, and the evening I spent working on a "duty" quilt for someone I am not fond of at all, but whose family I am indebted to for other kindnesses.
Wednesday was the day I participated in an on-line chat with an English-as-at-least-a-fourth language "technician" at Comcast.net who spent more than 20 minutes obtaining information from me in his fractured on-line English, only to tell me that he was incapable of solving my problems and he was passing my case on to "the engineers" and promised they would call me during the day. Ha! Wednesday was also the day I set up a G-mail account (and I hope soon it will stop making me think of G-Men and G-Spots) which has the amazing feature of being able to apprehend mail from Comcast and bring said mail into its own inbox. Email I send from there is, wonder of wonders, received by the intended people. I still have to go into the Comcast spam box and click each one, however, before that can happen. Wednesday was also the day that I moved all of my sent mail from the previous three days over to G-Mail so that I could resend them.
Which brings us to Thursday, the day the mouse ran into under my office door, through my office and under my closet door. Which started my day in a terrible fluster and it's been downhill from there. I made a calendar mistake. I spent 20 minutes on the phone with Comcast.net expressing my outrage that "the engineers" never phoned as promised and my email situation was still horrendous. I found out my dear friend Honna was in an auto accident (she's shaken but uninjured).
I'm so ready for Spring Break. It starts a week from today. I'll settle for a weekend. That starts tomorrow.

Karrin Hurd said…
Sorry about your horrible week Nancy. As you know I have long had problems with Comcast and getting through to you. Hope you can get things straightened out! Hugs, Karrin
Thursday, March 13, 2008 4:12:00 PM

SallyB said…
We get mice in the library where I work. We also get these annoying little gnat like bugs that are impossible to get rid of. I keep saying we need a library cat to take care of all the vermin! (except that I regard mice as exceptionally cute little critters, despite how destructive they can be!)

Also, on a totally unrelated note, I have been asked by the Kent Historical Society to write an article on one of the historic quilts in their collection. I am greatly looking forward to diving headlong into this project and learning more about it and its maker(s)! I'll keep you posted as things progress!
Thursday, March 13, 2008 6:05:00 PM

Pam said…
This post needed a SA (spewing alert) at the beginning...
"English-as-at-least-a-fourth language" cracking me up!!

I think that guy used to work for Verizon and I do believe I dealt with him over the course of weeks when my modem died! GRRR

So glad your friend was not seriously injured.

Three Birds Inspired said…
I KNOW I have talked to that guy!...and Comcast is no longer my carrier. Hope your weekend provides much needed "re-creation".
Friday, March 14, 2008 4:23:00 AM

The Naturalist's Daughter said…
*Hugs* What an awful week.
Hope that you have a wonderful and relaxing weekend. Your email problem is a nightmare, hope its sorted for you asap.
Friday, March 14, 2008 6:23:00 AM

Mrs. Goodneedle said…
EEEEEEEEEEEEEEEK! I'm impressed at your ability to get that great close-up shot while he nibbled your crackers on the desk top. ;)Yes, indeed, you need a break. Why don't you take just off for a major quilt show? Glad Honna's OK. Tech "help" really isn't, I understand and sympathize.
Friday, March 14, 2008 6:41:00 AM

ComcastCares1 said…
I am sorry to learn about the email problem you are experiencing. On behalf of Comcast, I sincerely apologize for the inconvenience.

I am hoping that we could at least alleviate your "week of Mondays" by resolving the email issue. I will be happy to reach out to my executive contacts to resolve this issue for you. If it is okay with you, will you please send me an email with your contact information?

I know you will be reluctant to provide this information via email considering the rampant fraud problems on the internet. If you'd prefer, you may also call me at 215 286 1700. My extension is 8966.

Thank you in advance for giving us the opportunity to assist!

Tanya said…
O dear. I'm behind reading this so I couldn't figure out who Comcast was from your most recent post. What a lot of headaches! I guess on both sides of the ocean since I had my fill last week too. I hate it when things that I think I understand don't work and then I realized I didn't understand them at all.

*karendianne. said…
I read this one earlier in the week, too. I'm turning into such the LURKER!

Not even the mouse got me out, did it? NOOO. Had to be COMCAST.

G-mail, G-strings, G-spots! Had to take me there. Had to.