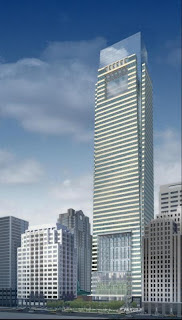 Look at this great building! It's command central -- the brand new Comcast tower in (not near) Philadelphia!
Okay, friends, you've asked how it's going. Here's the update.

1. It has been six days since I emailed Comcast to say that my good email was mostly going into my spam folder. The respondent emailed me back to click each message and indicate "This is not spam" and it would go into my inbox. I wrote back and told her that I knew that, but I would like this to stop; that I would like my good email to go into my inbox. I never head from her again.

4. It has been four days since I phoned 1-888-266-2278 and spoke with the individual who told me that I should call every day, once a day, in order to get my problem resolved. That was the day I began investigating other internet and cable television providers. My position is this: At my job, if someone asks me to do something, I do it. I have never told someone, "Call me back every day, once a day, and that will make me do it faster." I'd like to keep my job! And, frankly, I like to deal with companies that have the same ethic I do. It isn't my responsibility to nag a company after I've reported a problem; it's the company's responsibility to resolve the problem.

5. It has been three days since day I received (in my spam folder) the email from Mark C. who wanted me to either email him (from my account where no one receives my mail) or phone him. Again, I didn't think it was really my responsibility to stay on top of this; after all, Comcast.net already had two telephone numbers they could call if they really wanted to talk to me.

6. It was about an hour after I posted this that I began receiving a flurry of phone calls from important people and technicians at Comcast.net. Yesterday morning Joe received a call from either Mark C. or someone like him who wanted us to be assured that it was absolutely not true that I should have to call every day, once a day, to get the problem resolved. and that they were working on the problem With each successive contact discrediting the previous one, it's a little bit difficult to have confidence in the current speaker. However, shortly after that, I received a phone call from George who said he was working on the problem and he wanted to give me a phone number to call him on. He asked me to write it down, and I did, but assured him that I had no plans to phone him. I told him I was going out at eleven o'clock and hoped he would be successful in solving the problem. There was a voice mail from him later in the day and one at my office as well.

7. Today I received a phone call from Carl from Comcast.net Security. He went over the problem as he understood it -- noting the problem to be inability to receive the Comcast mail at my school account (actually, as far as I know, no one at any account has received email sent from me at my Comcast account for a week). There are two email addresses on the Comcast account; he understood that the problem was at the other one, the one I never use, not the one that I had reported was causing the problem (drat that English-as-a-fourth-language guy!). He also uttered those words that always fill my heart with dread, "I've never heard of this problem before."

8. But, actually, reader, I'm pleased to report that we are making a little progress. After 20 minutes on the phone with Carl, doing some tests together, he's come up with the hypothesis that it is the signature line in my email that is causing the problem! He is going to research further, but we discovered together that if I delete the signature line, my outgoing email actually does get received. Carl is going to look into finding a way that I can continue to use the signature line and still have my emails received. For the first time in a week, I'm actually optimistic!Reader, if I were you, reading this, I'm sure I'd wonder, "Just why is she so attached to the signature line?" And I'm here to tell you why. Pure and simple, because it says, See my Blog at: http://nancynearphiladelphia.blogspot.com/
Email Post

SallyB said…
I have had the same problem with Raex for quite some time now. Last year, the problem was getting over 1000 messages a day, mostly spam, and going directly into my inbox, despite having a spam stopper program. It took them months to fix the problem, and the solution turned out to be that all of my e-mail now goes into the spam box, even the legit stuff. I'm just too tired to complain anymore after the months and months and months of deleting thousands of spams a day in my inbox and complaining nightly about it to tech support. I'm afraid that their fix will be worse than the original problem and might result in once again finding gazillions of spam messages in my inbox. No thanks. I'll put up with going to my bulk mailer and sending the legit messages to my inbox, as inconvenient as that is.
Monday, March 17, 2008 3:45:00 PM

Shelina said…
Wow! I am surprised that they have time to check blogs when they don't have time to fix the problem. I'm glad that the problem has been pinpointed at least, and I'm sure you will be able to work out a way to have a signature line. Maybe you can type something after the line or you need something to finish off the html code link to the blog.
Although technically I'm not sure your signature line would cause your incoming mail to go to spam. I know the spammers do get clever, and I get spam in my inbox from time to time, but I haven't gotten regular mail in my spam box for a while. Maybe it is because I have identified most of the people who would send me mail.
Monday, March 17, 2008 4:18:00 PM

*karendianne. said…
ROFLMAO! This laughing at your expense (tacky) made my injured body worse. OMG this entire post is unreal and it sounds like a good test. I'm all for it.

Although I want my bloody dern signature dernit. I am attatched, too!

Mrs. Goodneedle said…
Arrggh! Why are we subjected to all of this confusion and redundancy from the provider? What ever happened to "the customer is always right" philosophy? Absolutely, completely ridiculous way to approach problems. You can write to me w/o the signature line... I check out your blog automatically, no worries.
Tuesday, March 18, 2008 6:28:00 AM

graceamazes said…
Sorry, but I don't buy it, since I have received MANY an email from you with your signature line intact (unless you were hand-typing it all these months...)