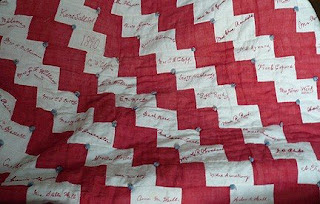 My friend at Kent Kapers II is doing some research for her church and needs some help. She writes:

I am helping with an upcoming exhibit at the Kent Historical Society Museum of a church signature quilt dated 1890 made by the ladies of the Universalist Unitarian Church here in Kent. It looks as if was made as a fund raiser and that they sold signatures to raise money, since there are many men's signatures on it. What I am trying to find out is what the pattern is called. It is composed of red and white brick shaped rectangles, alternating in diagonal rows longitudally. The rectangles are small, around 2" high by 4" wide.The signatures are written and embroidered in the white rows. The bricks are staggered; that is, they are not in a straight line. I tried googling 19th century brick pattern quilts but nothing matched or even came anywhere near what this looks like. Since you are part of a vast quilt conspiracy, someone must know what this thing is called.

The pastor of the church was a woman named Abby Danforth. I love that name. The museum has three late 19th century bodices which will be displayed with the quilt - black broadcloth, silk, one with leg o' mutton sleeves, one trimmed with lace and one with jet beading. We're going to pretend that the plainest one could have belonged to the minister. The fancier ones are from a well-known local family. This is probably TMI, but I get carried away by history.

Now we think the quilt is connected to a suffrage rally which the UU church held on Nov. 4, 1890 (the 1890 is written on the quilt), and was probably used to raise money for the rally to rent the Opera House and bring in a couple of prominent suffragettes. I'm guessing that they sold name squares because just about every prominent name in 1890s Kent is in there, both men and women. I have spent a couple of hours at the microfiche machine in the Ravenna library trying to find some news about it with no luck. The UU archives are at the KSU Library Special Collections and I'm trying that next. I love to do research, fortunately.
Anyone out there have any info about the pattern? Or anything else?
Email Post

Guenveur in Kent said…
This is weird, Nancy, since I just this minute finished my own post about the quilt. Thanks for doing your post on it. Somone must kjnow what that pattern is.
Tuesday, March 25, 2008 1:44:00 PM

Guenveur in Kent said…
To those who responded to Nancy's quilt query, I thank you. It is Streak of Lightning, which I think is tres appropos for a quilt by some uppity women.
Wednesday, March 26, 2008 6:09:00 PM