Bill and the Batiks, Part Two 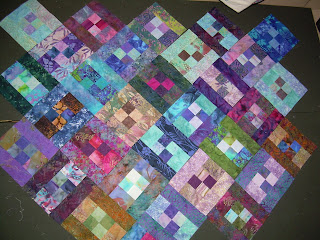 I've had more time than usual for sewing these past few days. The love of my life is out of town pursuing mandatory continuing education credits in Madison, Wisconsin, thus leaving me to my own devices with no one to answer to between 4 p.m. and 7:30 a.m.! He phoned the first day he was gone and said there were some snow flurries and I thought that was awfully early. By golly, it is still October!

Spoke too soon. For guess what started coming down Near Philadelphia around eleven this morning? Yup. Great big floppy snowflakes. The students freaked and some nervous preschool parents even phoned to see if we were closing early. The snowflakes, meanwhile, had no idea why they'd come in the first place. They'd heard something about a World Series, I suppose . . . .

The batiks. Oh, my. Can't get enough of 'em. The blocks go together quickly and making them is kind of like eating peanuts. You know, "Just one." Hah! Before I took this picture, "just one" had morphed into four without batting an eye. 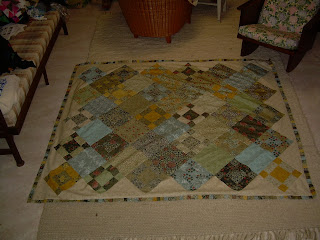 And, take a look at Bill! I'm pretty pleased with his first border. I think what is called for now is a wide cream border and that is all. I wanted the center of the quilt to kind of "float" on the cream, so when I cut my side triangles, I did the math according to the recipe and then added about two inches. Worked out just the way I'd hoped it would. The more I think about it, the more I hope I'm going to be able to part with him!

Being home alone, it is taking me a little longer to fall asleep at night. Last night as Bodacious and I tried to get warm, I started thinking about the Sister's Choice block and my Civil War FQs and a plan formed. I've told myself I simply have to clean up the "studio" before I start cutting anything new.

Will power not being my strong suit, we'll see.

Three Birds Inspired said…
Love the batiks! I am starting one on Saturday as a Christmas gift. I hope it goes together as quickly as yours.
Wednesday, October 29, 2008 5:18:00 AM

Teresa said…
Both quilts are looking lovely. I really like that small pieced border you have put on Bill and then the final cream one sounds perfect. I wish I could remember to do somethig like that when doing a border on quilts.
Wednesday, October 29, 2008 7:11:00 AM

Mrs. Goodneedle said…
I've heard there were snowflakes falling in many places yesterday! Lucky you. I love those batik blocks, and, you're right...Bill is one handsome rascal, well done!
Wednesday, October 29, 2008 7:53:00 AM

Guenveur in Kent said…
Bill's looking fine. I like the pieced border with the cream. As I write this (Wednesday), it is snowing in Kent, Ohio, but not really sticking to anything. I love the picture of Sarah and her first snow. When my Australian son-in-law to be first visited us, in January, he was just amazed. We took him up to Lake Erie which was frozen that year and he said, "I've only seen things like this in cartoons!"
Wednesday, October 29, 2008 10:34:00 AM