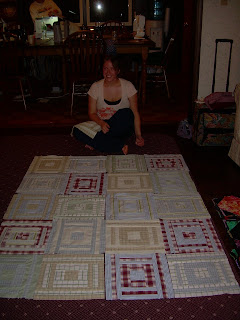 Turbo was working on this project which she made from cut-up men's shirts. Actually, the men themselves weren't cut up. It was their shirts. This quilt won the prize for the best name: Josh Lyman's Pajamas. 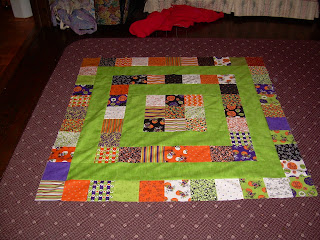 I couldn't get enough of this absolutely spectacular Halloween quilt that Nubbin was making. But she didn't offer to let me take it home. :-( 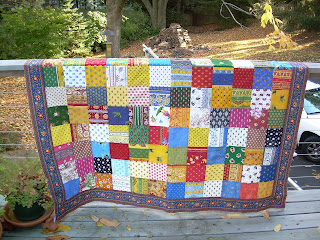 I'd put this quilt together ages ago after buying charm packs at the Lancaster show back in April. I'd bought the border fabric then, too, but didn't know how to miter the corners. I brought it along because I believed Sherron would know how and would also teach me. I was right. 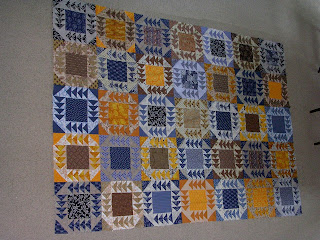 Turbo didn't work on this quilt during this retreat. But it is so spectacular that I just thought I'd post a picture of it here anyway. 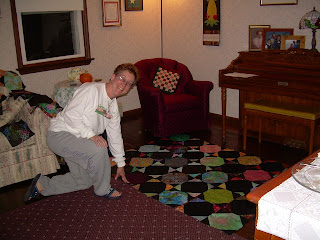 Judy seems to be in her Snowball Period. Here she is working on her third Snowball quilt. This one is a king size. 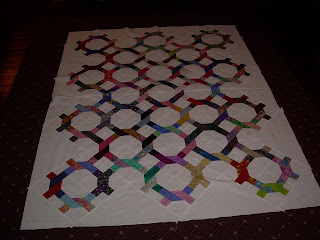 Everyone was intrigued by this quilt that Marsha was working on. Called Rubik Rings, she was looking for border ideas. Rather than help her with that, people instead urged her to teach them how to make the block. And she did. 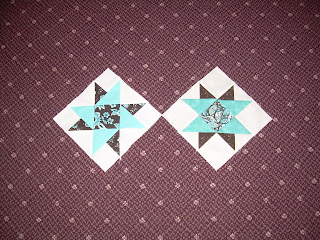 I worked on my swap blocks, finishing all eleven Air Castles and all eleven Judy's Stars. 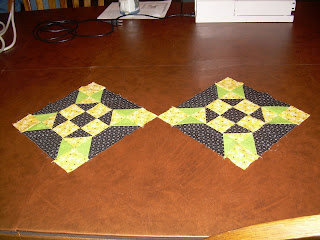 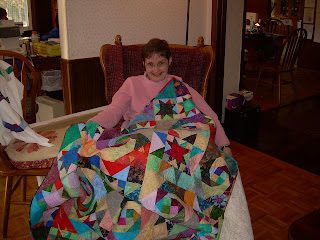 Bonnie, my sister, has been working on this batike Shakespeare in the Park variation for quite some time. Isn't it gorgeous? 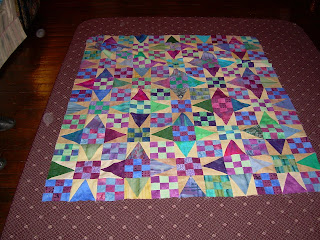 Bonnie's current project is a gift for a young woman from Ghana who has come to this country to attend high school and Bonnie is one of her major sponsors. Sarah's going to need this quilt soon. 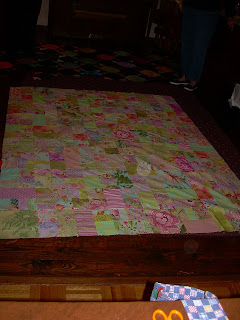 Eileen was working on this absolutely stunning quilt made from florals from various designers. Wouldn't you just love to take a nap under it? 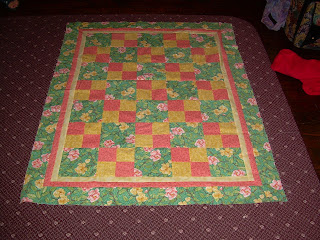 One of Helen's projects for the weekend was this pretty lap quilt her difficult mother-in-law had requested. As to whether or not the quilt will actually reach its destination, one is referred to its name, the first runner-up in the imaginative names competition: Fat Chance, Old Lady!

*karendianne. said…
These are all so fun and pretty and Rubik Rings is a real brain bender! Very cool. Of course, we love them all and thank you for sharing.
Sunday, October 19, 2008 6:35:00 PM

Tanya said…
Wow. What gorgeous quilts! I especially like your sister's SITP in batiks and the one she's making for the girl in Ghana. That Rubik's Ring is intriging too!
Sunday, October 19, 2008 8:41:00 PM

Three Birds Inspired said…
You certainly quilt with some creative (and clever) women. I LOVE the names of the quilts. "Fat Chance, Old Lady" made me laugh out loud!
Sunday, October 19, 2008 9:53:00 PM

Unknown said…
Oh, I am sooooooo enjoying this show and tell about all these gorgeous examples.

I would love to do a retreat like that.

Mrs. Goodneedle said…
This is an inspiring and productive group of ladies that you hang with! I am in love with that blue and yellow WGC that you snapped a photo of on the wall! I'm still trying to figure out the Rubik's Rings... cool!
Monday, October 20, 2008 3:50:00 PM

StitchinByTheLake said…
What wonderful quilts! The best part, of course, is the time spent with friends. blessings, marlene
Tuesday, October 21, 2008 8:09:00 AM