Just a Bit of a Rant 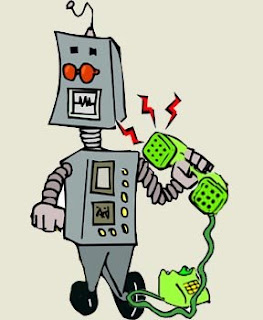 One of the very best things about going away on the weekend before the election is not having to answer the telephone! Already I'm receiving on average two calls per day from people or machines I don't know, urging me to vote for or against a particular candidate. I know that this will intensify over the next few days. Intensify to the point where I'm likely to just take the phone off the hook when I'm home. I already check the Caller ID now and don't answer any calls that are UNAVAILABLE or from a 800 or 888 number. And when I'm downstairs where I don't have a Caller ID phone and I stop sewing to answer a call from a political source, I get peeved.

Who in their right mind would vote for or against a particular candidate because someone they don't know calls on the phone -- likely interrupting something one wants to or should be doing -- and urges that particular voting? Who, I ask you?

I've received so many calls in recent election seasons from our Congresswoman and her staff and her machines that I've told her that if she isn't able to manage a simple request from a constituent to be removed from a calling list, I surely wouldn't trust her to do anything more complicated. Like govern. And so, if I get another call, I'll vote for her opponent. Simple as that.

And -- even worse -- does anyone at all listen to recorded messages that come into the home? Much less take voting counsel from a recording? An automatically dialed machine-recorded instruction? Huh? Don't the politicians realize how utterly annoying and insulting this practice is?

Unknown said…
I totally agree. I think it is idiotic. Have a great weekend and enjoy being away from the phone!!!

*karendianne. said…
I feel the exact same flippin' way dangit. Fortunately I haven't had any calls. Do you think its because I take the phone off the hook a lot? Hee!

Guenveur in Kent said…
I have not had any of these callsd. I don't know why, but I am grateful for being left out. When I went to Obama headquarters to work, I told them that I would not make phone calls or canvas
neighrhoods. When I wokred at a non-profit, levy supported agency, we were required to staff a phone bank. I hated it. I did not like the idea of interrupting someone's life with a phone call, especially as we already had posters, lawn signs and newpaper endorsements galore.We almost always won, unless we were asking for a large increase.
Saturday, November 01, 2008 5:40:00 PM

Laurie said…
I guess I'm lucky I don't live in a swing state.

Although those of you who do have the rest of us biting our nails and holding our breath.

You must use this power only for good!!

suz said…
I so agree with you about this. I recently got rid of my landline and just have a cell-which I need because I have an elderly parent who is very ill. As a result, "they" don't have my phone number! Hooray! I am so tired of this election and all the negativity. I just want it over! And God bless whoever ends up with all the problems incurred over the last 8 years. Why would anyone want this job right now anyway?
Monday, November 03, 2008 11:11:00 AM

Tanya said…
We get that in Japan too... well shopping and stuff, not much campaigning. Either way, it does seem an odd way to get people on their side. More annoying than anything else and no I doubt I'd buy or vote for someone who so pestered me.
Wednesday, November 05, 2008 7:33:00 AM