Bill and the Batiks 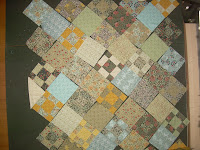 Bill's making great progress. I've had a lovely time cutting and pairing the FQs to make the pieced blocks and then trying to place them among the non-pieced blocks so that same fabric edges don't touch. I always liked puzzles . . . . Anyway, what needs to happen next is the cutting of the side and corner triangles. Going to use that cream that you can see on the left side for this, and then decide about any additional borders. Might want some, might not. I don't draw out my quilts ahead of time like Turbo does, so I don't know about borders, really, until after I get the main part together. Clicking on the photo will make it large enough to see the pretty fabrics.

As smitten as I am with Bill, as I've been working on this project, someone very dear to me who has been through a very hard time has been in and on my mind and heart, and I'm thinking this quilt just may be for her. 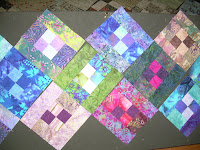 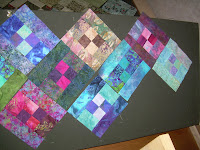 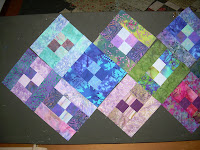 What have we here? Well, they are batik blocks made from a couple of sources. Some month back I won some small batik cuts from a give-away that Amy was having (she's busily nesting, and I remember that feeling), and I had a delightful time pairing them and making four-patches. I didn't know what I was going to do with them, but it was so much fun to do them as a leader-ender project.

Recently I joined another swap list and lo! and behold! one of the very first swaps that they held was 2.5 by half WOF strips of batik! Two days ago I came home from work to find my 100 assorted strips had arrived. And right away I knew they were destined to frame the four-patches. I pulled out a bunch of the four-patches that looked nice together and then started pulling strips and pairing them up. Being half-WOFs, I could get either the short sides for two blocks or the long sides for one block out of a strip. Either way, leaving a small bit of residue to go into the bitty scrap bag for Turbo. Again, you should be able to enlarge the photos by clicking on them.

Truth be told, I'm not getting much else done in the way of responsible tasks like the laundry, like the dishes, like -- well, you get the idea. I am obsessed with these! Am mixing in some strips from batiks in my sizeable bin, because out of the 100 strips I received, only about half are in this color scheme. Which, of course, will leave me plenty of opportunity to pursue another project!

After some of the hard times I've had to report in the past few weeks, I'm so glad to be taking such joy in playing right now!

Tanya said…
Ooh. I love batiks but really have only dabbled in them. That is going to be a wonderful quilt. I know the person on your mind will be uplifted when she/he sees this.
Saturday, October 25, 2008 8:43:00 PM

Unknown said…
I really love the batik blocks...this was a really fun swap...I received over 100 strips and only (3) of them were from fabric that I already have...think that means that I need to go batik shopping! looking forward to the finish....
hugz
Pam
Sunday, October 26, 2008 10:28:00 PM

Guenveur in Kent said…
As the proud owner of a Bill, I am sure you will choose just the right border for him. My Bill wishes you much luck and love.
Tuesday, October 28, 2008 3:04:00 PM

Micki said…
I found you through a friend's blog. I am originally from Philadelphia, and I am married to an Irishmand and now live in Ireland. I am enjoying reading your blog, and hope you visit mine. I have enjoyed this morning watching CNN with the victory speech of Obama, and then also reading your posts.
All the best,
Micki
In Ireland
Wednesday, November 05, 2008 3:04:00 AM