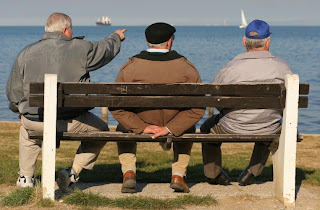 The friendship began about twenty-five years ago. We were a group of women who met at a women's club, and during the year that the club became divided into three factions, the ten or so of us bonded together. We determined quickly that the three factions were, indeed, The Good, The Bad, and The Ugly. Within the year, the women's club had pretty much come apart but The Good Guys stayed together and are together still. Quickly the husbands or honeys were brought into the mix.

Over the years we've shared many experiences, and milestones, welcoming new babies, holding all kinds of theme parties, celebrating birthdays -- milestone types and ordinary types -- seeing our number diminish from relocations and picking up a couple of replacements. We've laughed together and cried together, supported each other through divorce, through cancers, through kid problems; we've buried each other's parents. In recent years, we've had bridal showers, attended weddings, and discovered the wonderful world of grandparenting.

About ten women, laughing together, loving each other for a long, long time.

The past couple of weeks have been the hardest we've ever had, collectively. Cessie's daughter had been through a roller-coaster of possibilities and frights on the liver transplant front; as of today, she is well enough to be discharged to Cessie's home with a beeper while she waits for the organ donation. Donna's hubby is seeking a third opinion for not one but two types of cancer that have accosted him in recent months. Eddie, Vicki's husband, is in hospital with a relentless infection. Dottie's mom is terribly sick with something mysterious. Steve has been in hospital with a progressive familial lung disease. Joanne and Doc have had a year of many, many problems and are trying to get things in order for a planned move to a lovely retirement center, but her nails have developed a painful fungus infection and he's awfully frail. Early this morning my Joe had some kind of peculiar episode that has sent him to the Cardiologist this afternoon to be checked out.

And late this morning, our group experienced another first, as we buried Kathy's husband Steve, who lost the lung disease battle while waiting for a transplant. We are all people of faith and Steve, perhaps, the one with the strongest faith. There is a huge, empty hole in our group now. It is incomprehensible.

One of the Good Guys. Gone. Never to be forgotten.

Teresa said…
I am so very sorry for your loss and the loss to your group, but so happy for you for all the wonderful sweet memories and support you have found in such a special group of friends.
Monday, October 06, 2008 4:19:00 PM

Mrs. Goodneedle said…
Heartfelt sympathy to you and your friends, I am so sorry to learn of this sad outcome. I'm glad that you all have each other.
Monday, October 06, 2008 6:48:00 PM

*karendianne. said…
Always I'm appreciative for the way you so simply share LIFE in all its colors, shades and tones.

I am so sorry for the loss of your friend and for all the trials in the lives of those you love.

Guenveur in Kent said…
kvI am sorry about the loss and all the threatening events your friends are experiencing. How awful that all of this is happening at about the same time. It's good that you have such happy memories shared with these good people and that you have each other for support no matter what. I have lost a lot of friends as I, and they, have aged. I still want to pick up the phone and call them. I treasure the times we had together.
Tuesday, October 07, 2008 4:48:00 PM

Tanya said…
I'm sorry to hear of all the pain you and your friends have been having. For some reason God send sickness and trials to make us appreciate the good things. I never welcome it though and I always seem to question Him. I hope you will all be filled with HOPE.
Friday, October 10, 2008 7:39:00 AM