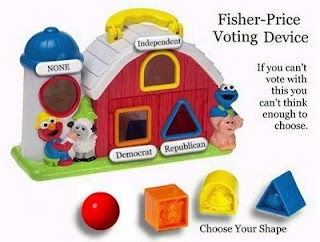 Polly sent me this story this morning and said that Snopes.com had verified it as something to be concerned about. I do not generally pay much attention at all to anything that urges me to "tell everyone you know," but after that whole Hanging Chad mess, I thought I'd just put it out there for people to think about. Could it hurt?

THE PROBLEM: "Straight party voting" on voting machines is revealing a bad pattern of miscounting and omitting your vote, especially if you are a Democrat. Most recently (Oct. 2008), a firm called Automated Election Services was found to have mis-coded the system in heavily Democratic Santa Fe County, New Mexico such that straight party voters would not have the presidential vote counted.

STRAIGHT PARTY VOTING is allowed in 15 states. Basically, it means that you can take a shortcut to actually looking at who you are voting for and instead just select a party preference. Then the voting machine makes your candidate choices, supposedly for the party you requested.
HOW TO PROTECT THE COUNT against Straight Party Trap:

1) NEVER CHOOSE THE STRAIGHT PARTY VOTE OPTION, because it alerts the computer as to your party preference and allows software code to trigger whatever function the programmer has designed.

2) SEND THIS INFORMATION OUT TO AS MANY PEOPLE AS YOU CAN, to get the word out.

5) LOOK FOR UNDERVOTES (high profile races with lower-than-average number of votes cast) and flag them, post them, bring them to the attention of others for additional scrutiny.

*karendianne. said…
Yeah, the whole hanging chad mess. Its an embarassment to be from Florida sometimes. ;) Thanks for sharing this interesting bit of info. Its a lot of responsiblity to be a citizen right now. Although I would like 150k for some new clothes. I could work that out.
Thursday, October 23, 2008 1:53:00 PM