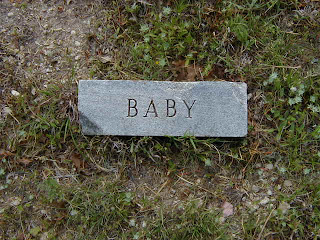 My friend Matt, over at Faith and Family, writes about a variety of subjects. He doesn't post as often as I'd like, but he is always thoughtful in his subjects and in his writing. Please go take a look at what he wrote earlier this week. It is a wonderful and sensitive post about a woman whose ministry involves visiting parents of stillborn infants and photographing them with their babies.

This post brought back the memory of a Saturday a few years ago when I was serving as on-call chaplain at a large inner city teaching hospital. I'd agreed to come in and carry the beeper for a day so that one of the chaplaincy residents could have a much-needed day off. The early part of the morning was quiet, and then the beeper went off and it was the kind of call that a chaplain dreads.

A young couple had come into hospital the previous afternoon to deliver their third child. Upon hooking the mom up to the monitor, it was found that the baby had died due to a nuchal cord. The mom had to labor, and about fourteen hours later she delivered Lindsey, a little girl with a cleft lip and some other problems.

The family was new to the area, in the middle of a job change, no family in the area, no church affiliation yet, no local friends. They talked about their 4-year-old daughter at home who was expecting a little sister, and needed to figure out how they were going to tell her what had happened. They had a 2-year-old son as well. Dad's parents were gone and Mom's mother very ill; their situation couldn't be much sadder.

They wanted to have Lindsey baptized, and so we talked about blessing vs. baptism. Baptism of a stillborn is theologically unsound, but I have done it anyway if it was important to the parents. This couple agreed to a blessing which was done with the same holy water and language as used in a baptism, only saying "bless" in place of baptize.

I liked them so much. After the blessing, I left them alone with their baby.

I returned a couple of hours later to deliver the certificate of blessing I'd prepared. The nurse told me that mom was having trouble giving the baby up but it was time for her to do that. When I went into the room, the dad was holding Lindsey and the mom was looking through the box that held the foot prints, the photos, the little cap and other things that the hospital had gathered for her. Off to one side was a metal table with wheels; this would be used to take the stillborn baby down to the morgue. Of course the mom was having trouble!

Dad asked if I wanted to hold the baby and when I had her it seemed as though it might be easier for the family if I took the baby from the room in my arms instead of the nurse taking her away on the metal table. We prayed together and they kissed her goodbye. It was so sad, and yet handing the baby to the chaplain (instead of putting her on the wheeled table) was somehow metaphorical for giving her back to God, and they were able to do that.

I was scolded by the nurse for risking infection by taking the baby in ungloved hands, but I didn't care. It was the right thing to do.

NoVA Dad said…
At the outset, I'll say that you're too kind in your praise of my blog (and I'll try to do better about posting more frequently:-), but I actually can't take credit for the post you've linked to -- it was a story run in the Washington Post that I found too compelling to keep off my page.

You've got your own amazing story here; thanks for sharing it. I can remember the joy I had when both of my little girls were born healthy, and can't even begin to imagine the grief and pain these parents must feel. I know it was of extreme comfort to them to have you there with them, and for doing what you did to help ease their grief just a bit. I took time after reading the Post story to go to the organization's website, and it was impossible for me to keep it together when watching the opening slide show/music presentation.
Thursday, October 02, 2008 3:21:00 PM

Mrs. Goodneedle said…
Thanks, Nancy, for your sensitivity and your compassion. You were, indeed, the face of God to that couple. The ministry of which you speak is a truly valuable one.
Thursday, October 02, 2008 3:49:00 PM

Unknown said…
Nancy - thank goodness you were there to allow compassion to override dictat. I have no doubt your action made their grief a little less difficult to bear
Thursday, October 02, 2008 5:28:00 PM

Ms. Jan said…
I wish my mother had someone like you when she, new to the town I was later born in, gave birth to a stillborn baby. My Mom never got to see her daughter, there was no funeral, nor even a headstone until both of my parents passed away and my sisters and I had one made for all of them. A kind soul at the hospital might have made things different for them.

Brenda said…
Well, I just spent the saddest hours I can remember reading the stories of those parents on NILMDTS. Thank you so much for reminding me what is truly important in MY life. Now I must go and hug my Prince.
Friday, October 03, 2008 2:00:00 AM

Anonymous said…
While reading this blog, tears run down my face. I am so sure you were put there in that space in that time frame with a reason... God must have put you there!

Guenveur in Kent said…
The family was fortunate to have someone with your compassion and also the ability to confer a blessing. I think they will always remember you with love and thanks.
I don't k now what the Lutheran belief is about babies dying without baptism. I don't know if the Catholic church still believes in Limbo, which is where unbaptised babies spend eternity. That's one of the reasons I'm not a Catholic any more. Or anything, actually. Who makes these things up anyway?
Friday, October 03, 2008 3:15:00 PM

Tanya said…
Your post made me cry too. It is always most important that death in whatever form and age is met with human feelings and hands rather than rules and cold steel. How wonderful for that family that God brought you to them at the moment they needed to give up their child.
Monday, October 06, 2008 6:33:00 AM