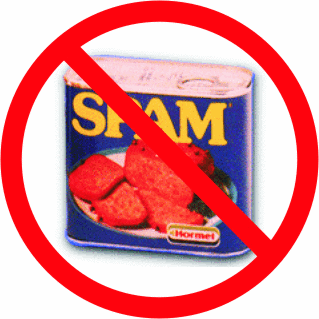 The first Spam comment I received on my blog was something directing readers (and me) to a site where someone was selling something. I deleted the comment and moved on.

Put a Word Verification up on my blog after the next one, and while I know no one is crazy about verifying ecomif or spludlat in order to leave a comment, it was the right thing to do because these sales comments stopped coming.

Then, back in the spring, when I was working on the political campaign, I started getting comments of a different sort. They were racial in nature and made some suggestions about my sexual preference. It was strange to see them on my comments section. I had a lot of reactions: annoyance, intrusion, pity, amazement were some of them.

I have a mental image of the commenter -- he's a lonely guy with a low-paying job and few interests. I say "guy," but, heck, it could be Dot, for all I know, as strange as she's become over recent months. She really ought to get back to quilting. Anyway, he doesn't visit often, and it is always a surprise. I usually find one of his comments in my mailbox and delete it and then go over to the blog and delete it from there so any subsequent reader won't see it and be offended. I know I'm not alone; my friend "J" hears from a person who has to be the same guy, judging by the nature of the comments. Good old Anonymous.

Been thinking, though, about whether to continue spending my time deleting his comments. If I'm reading someone's blog and see an inappropriate comment posted, I don't feel offended. I just move on and leave my comment. I suspect my readers have the same reaction.

For a while I had the feature where all comments had to have owner approval. That was even more time-consuming. So I'm wondering today, what other people do, whether they delete offensive comments or just leave them alone. I don't expect to get much, if any, response, but that's what I'm thinking about today. That and how pitiful it is that somebody has nothing more worthwhile to do with his time.

Lorraine said…
I think you can set your blog so that anonymous comments are not permitted...the first time I got a weird comment I just thought "what the"...and deleted it....haven't had too many more so hasn't been an issue....it is a bit sad really that someone lurks around and places inappropriate comments on quilter's blogs......or any blog for that matter.....! Not sure what sort of gratification that would leave one with.....!

word verification: swutamci.....perhaps that is someone who leaves inappropriate comments on blogs!
Thursday, January 22, 2009 8:58:00 PM

JoAnn ( Scene Through My Eyes) said…
So far I've not gotten anything spammish or bad - thank goodness. I do think that if I received a comment that was rude concerning my quilting or my subject that I would just leave it up so that other readers would see who makes such rude and mean remarks. I don't allow annonymous - so if you are mean then you are seen. Might keep the rude and mean people away.
Thursday, January 22, 2009 10:24:00 PM

floribunda said…
I've been lucky enough to not get anything really objectionable -- I can't remember if I'm allowing anonymous comments or not, though! Maybe that's the next step you could take. I probably wouldn't bother to delete anything unless it was truly obscene.
Thursday, January 22, 2009 11:46:00 PM

Tanya said…
I've been getting requests for help from somebody needing money. They seem to go directly to my e-mail and at first weren't too unlike blogging visitors who just want to make a closer relationship. I even answered at first but then wised up. I don't know why I feel guilty deleting but I do. (But I am deleting...)
Friday, January 23, 2009 2:57:00 AM

Anonymous said…
I must admit, I am a deleting kind of girl. I had some "not so nice for other people" comments and just deleted them from my blog because I think that my blog "deserves" better and nicer. I do not want to be a judge telling everybody what to comment, but I do think that commenters should be respectfull and nice in their comments.

Mary @ Neat and Tidy said…
I just started blogging in December and got my first weirdo today. It freaked me out! I deleted the comment. Glad to read I'm not the only one.
Friday, January 23, 2009 4:29:00 PM

Exuberantcolor/Wanda S Hanson said…
I deleted a couple of extremely long radical comments a while back and haven't had any lately. I think they should be deleted because somebody was leaving some that when you clicked on their name it started scanning your computer. Most aren't that sophisticated but why take the chance.
Friday, January 23, 2009 5:40:00 PM

Ms. Jan said…
Hi Nancy,
I go back and forth, but since I've enabled the moderation feature, "Anonymous" has only commented a couple of times. What (s)he says about me isn't so important to me, but the racial comments do bother me. Guess I'm going to leave the screening up for a while longer, though.
Love you just the way you are, Sistah,
"J"
Friday, January 23, 2009 7:01:00 PM

Kim said…
I leave my blog open to anyone and rarely get spam or weird comments. When I do, depending on content, I might delete. Then again, I usually avoid the more controversial subjects on my blog. Your mention of Dot cracked me up though, sad as that may be. I really thought she'd go back to quilting in November, but I've heard not--I don't visit anymore though. I'm really not interested in reading messages of hate, whether it's in the comments left for me or in someone blog post. Negative energy is the worst, isn't it?!
Monday, January 26, 2009 11:08:00 AM

SallyB said…
I get the feeling that there are still some very prejudiced, and what my mom would call "unreconstructed southerners" out there who still can't fathom the idea that we elected someone with a different skin color to be our President. They seem to find places to vent anonymously because quite frankly, they are in the distinct minority and probably, as a result, feel somewhat threatened by our increasingly ethnically diverse country. What they fail to remember is that their own ancestors doubtless suffered ample prejudice when they came to these shores, depending, of course, on where they came from, what their faith was, and what language they spoke. But that all seems to be forgotten in the wash of history.

I've gotten spammed a few times myself, but.....they're usually just trying to sell me something I don't want. And I ignore those comments and don't bother to delete them. I'd only delete something blatantly offensive and/or inflammatory that could cause real problems.

Word verification: mookers. Hmm. My sister Emily's beloved late cat was named Mookie (a gorgeous and extraordinary Maine Coon cat) - perhaps this means "being like Mookie", but that's impossible, because he was such a unique cat who lives in memory as one of the most amazing cats I've ever met. He lived to the ripe old cat age of 17 and Em still misses him terribly.
Monday, January 26, 2009 11:11:00 AM