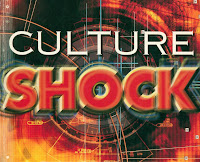 More of a culture pile-up, I guess, than a shock.

See, we've had a Philadelphia Orchestra subscription since about forever. Six times each year we go downtown to the Kimmel Center to hear the orchestra play. Soon after we moved into our present house, about nine years ago, we learned that our wonderful nextdoor neighbors have the same subscription series that we have. So six times each year, usually on a Tuesday night, we go downtown with Maggie and Frank and have a wonderful dinner someplace splendid, and then go hear the concert. The subscriptions have the feature that if there is something on a different subscription that we would rather hear, we can exchange tickets for the preferred concert. For a small fee.

Last year, Mary had some tickets to the Sunday afternoon Chamber Series that she couldn't use, and twice she offered them to us. We accepted. Joe loved it. Absolutely loved it.

Also last year, there were two plays at the Arden Theatre that we attended and really enjoyed.

This year, I subscribed us to the Arden Theatre. Five plays.

This year, Joe subscribed us to the Chamber Concerts. Five Sunday afternoon concerts.

Now you'd think that five plays and eleven concerts total spread over a nine month period would be manageable and enjoyable. You'd be right. If they were spread evenly. Our events have tended to occur in clumps. One of each, right after the other.

Like the clump we're in now. Last night we went to the Arden to see the brand new play, My Name Is Asher Lev. We loved it. If you live in the Philadelphia area, you might want to consider going. Not only was the play marvelous, but Chaim Potok's widow was present and after the performance, she and the actors sat on chairs on stage and took questions from the audience. Fantastic.

This afternoon was a trade-in concert for the Orchestra. They were playing Schubert's Ninth (The Great) which, IMNSHO is the just the best piece. And they were only playing the Friday matinee and the Saturday night. So we traded in (Frank and Maggie couldn't do this one) and worked a half a day and heard the Bartok Violin Concerto and The Great and drove home feeling mellow and just a little bit decadent for having had such a splendid time in the middle of the afternoon. Stopped at the pub for a sandwich. Lovely.

But wait! There's more! Sunday afternoon is a Chamber concert. A Mozart and a couple of other things.

Culture Shock. Or Culture Pile-Up. Whatever. We're loving it.

Unknown said…
You lucky girl - my dh just can't get classical music at all so it's something we just wouldn't do together although with DD2 learning the violin I have high hopes for her accompanying me sometime soon - mind you I don't know what ticket prices are like in the States but they are incredibly expensive over here - a real once in a while treat only in our budget sadly
Saturday, January 24, 2009 4:18:00 AM

Glad you are having a fun time.

LoieJ said…
Wow, great entertainment. We don't have so many concerts in our series that they pile up, but I remember that feeling from kids' events that all seemed to cluster twice/year.
Saturday, January 24, 2009 10:13:00 AM

Juliann in WA said…
It does seem that these things pile up on one another but what a great place you live to have so many options.
Saturday, January 24, 2009 3:07:00 PM