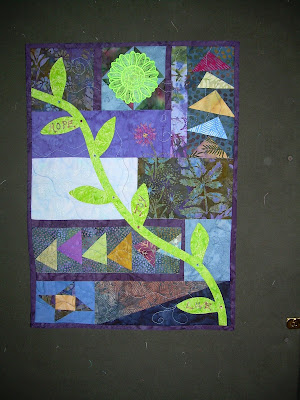 About a year and a half ago, May Britt posted on her blog about a 14-month mini-round robin she'd participated in. She showed pictures of the fourteen finished projects, each of which followed the same "recipe" and each of which was totally distinctive from the others.

I was enthralled, as were many of May Britt's other readers, some of whom inquired, "Why can't we do this?" Indeed, why couldn't we? I put out a call for a show of interest and some wonderful women responded. Our only regret was that in order to be equitable as far as postage was concerned, we had to limit participants to United States citizens.

Each project began with the small square in the upper left hand corner and then, according to a recipe, additional fabrics were added; embroidery, applique and writing were done, and ultimately the little round robins were quilted and bound and made their way home.

During the fourteen months we worked, we kept progress secret. I had no idea at all what was going on with my project. Imagine my delight when it came home last week! "Hope," "Joy," and "Love" have been important to me during this year, even more so than usual.

The group had begun to talk about doing another project together and I thought I had enough going on in my life at present and begged off. Then my little quilt came home and instantly I changed my mind.

LoieJ said…
I really like this concept, that the round robin wasn't necessarily round nor square, nor symmetrical. Maybe this is something that I could mention in my guild, although some of them don't think out of the box.
Sunday, January 18, 2009 2:57:00 PM

Renee said…
this is such a great idea! Did the last person to the quilting? Can you add a post with the rules. I would love to see how many folks I can get to do something similar.

paront1222@comcast.net said…
My thoughts...absolutely gorgeous, and what a nice sentiment.
I've often thought I would like to do one of those 14 month things with the recipe like you mention.
I just don't know if I'd have the time or the creativity....
Peggy
Monday, January 19, 2009 11:37:00 AM

Mrs. Goodneedle said…
It finished up wonderfully, the treat for all of us was seeing what happened after it left our homes and hands! Enjoy, Nancy!!
Tuesday, January 20, 2009 10:55:00 AM

Tanya said…
Oh, it really is wonderful! Our group started the same quilt but so far things are going slowly. It looks like someone somewhere is piling things up (good gosh, only an 8 person group!) but we don't want to point fingers. I too wonder what will come back in the end! Love the looks of yours! Great use of embroidery on the batiks!
Tuesday, January 20, 2009 6:18:00 PM